An Île-de-France residence in Corbières

A few kilometres away from Coustaussa castle, a lush green valley emerges. In this unexpected tranquillity, the keep of Arques, a Gothic architectural masterpiece from Île-de-France, emerges.

During the 11th century, the village of Arques was at a crossroads, linking Fenolhédès to Carcassès. By the end of the 12th century, a single seigniorial tower in the centre of the village was the only evidence of the power of the Termes family. In 1260, Olivier de Termes sold Arques to Pierre de Voisins, a powerful French knight. His grandson, Gilles de Voisins, began the construction of the castle in 1280, and decided to expand the village. Gilles and his descendants built a castle-residence away from the centre of town. They must have called upon the King's craftsmen, at work in Carcassonne and in the whole Corbières region, to build this magnificent residence, which combined comfort with military power. During the 16th century, the castle served as a refuge for the people of Arques when the Spanish, followed by the Protestants, destroyed their village. The dukes of Joyeuse, who were lords of Arques, left the castle to build a new castle in the Renaissance style in Couiza, on the banks of the Aude.

Located inside the outer wall, to the left of the entrance, these lodgings are in a square tower built on two floors. On the first floor is a half-buried room with barrel-vaulted ceiling. On the second floor, the room displays ribbed vaulting supported by sculpted bases. Two magnificent faces recall the elegant style of the sculptures in the minstrels' room at Puivert Castle. 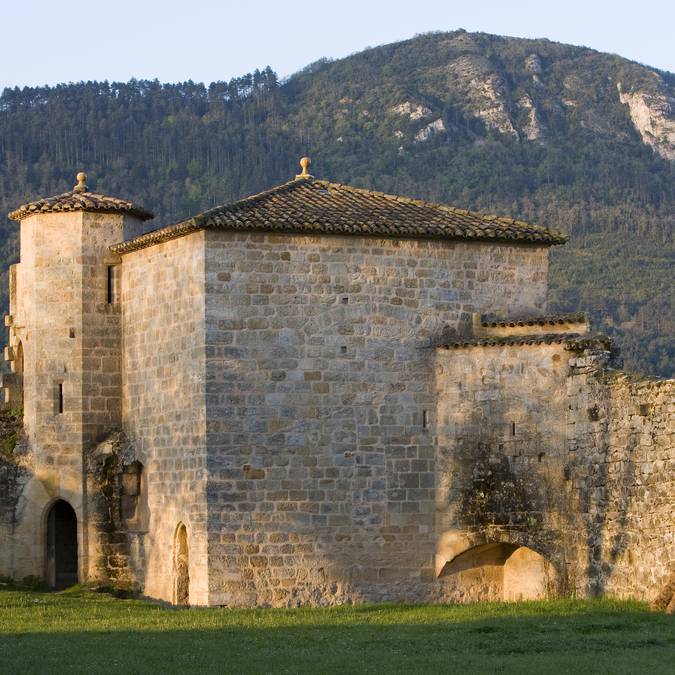 The outside of the keep

With its four watch towers (one at each corner of the buttresses), the keep looks like it is on stilts. At 24m high, it is an impressive structure, made from golden sandstone and topped with pinkish tiles. The walls are covered in almost 100 openings, including arrow slits, windows, doors and deadfall trap. 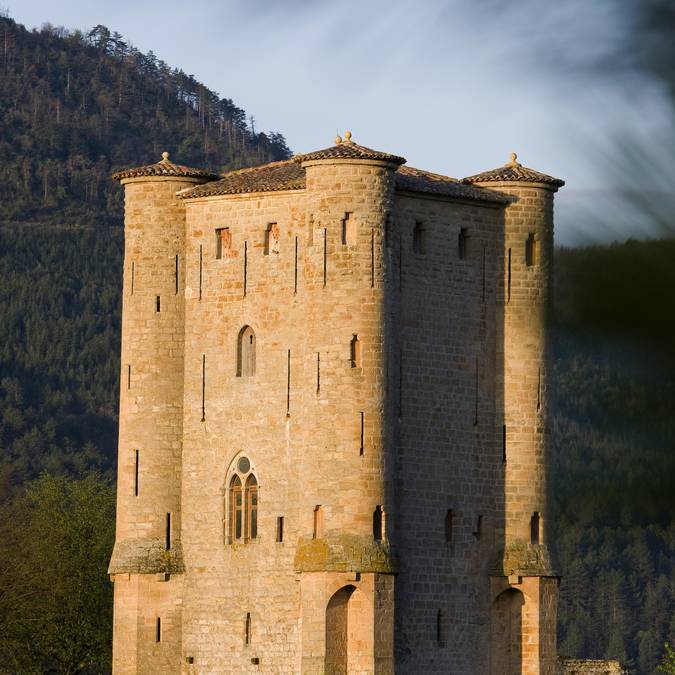 The short spiral staircase in the South-East turret connects the four floors of the keep. On each floor, the impressive quality of the building is evident: here, eight ribs meet at a single point. You can see a trefoil arch window, and a fireplace with sculpted columns. The room is perfectly octagonal. 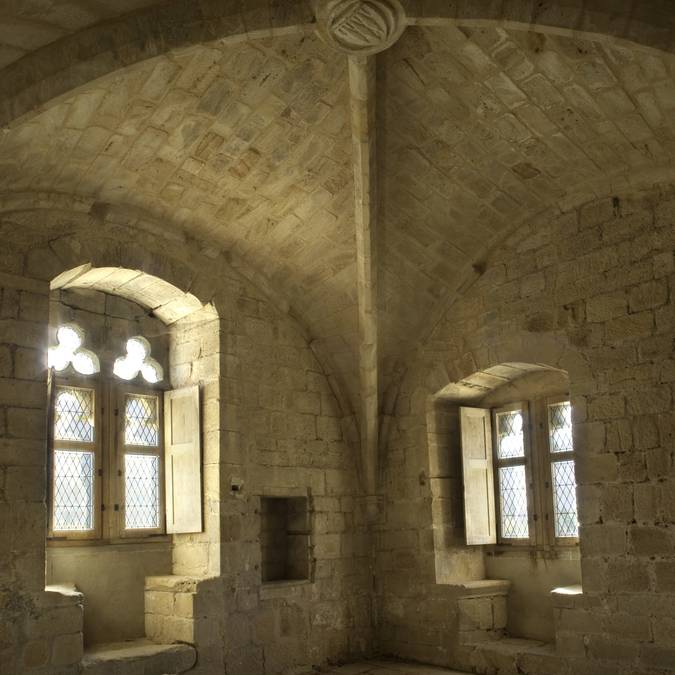 The castle of Arques has undoubtedly benefited from all the art made by the King's master artists. Many contributions from throughout Carcassonne, Peyrepertuse and Termes, can be found displayed here. The care lavished upon interior decorating was innovative, as it suggests a Renaissance-era style, which would not take off until after the Hundred Years' War. 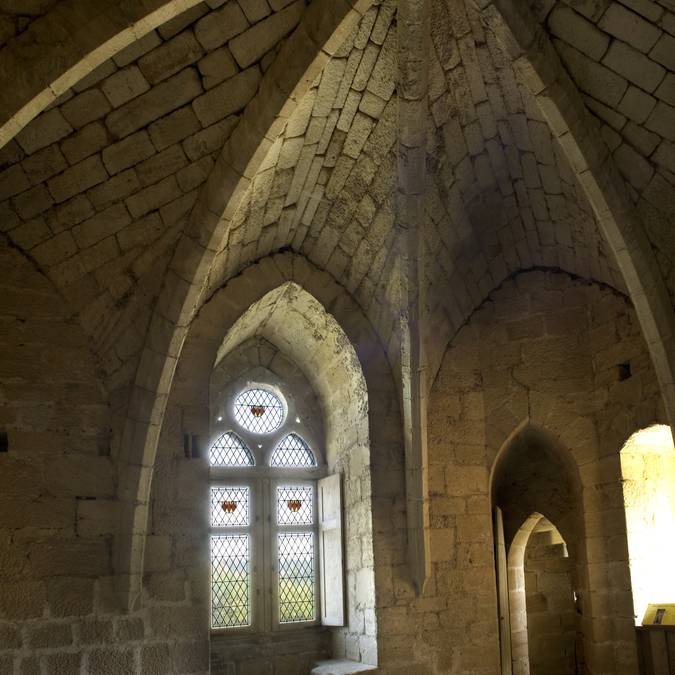 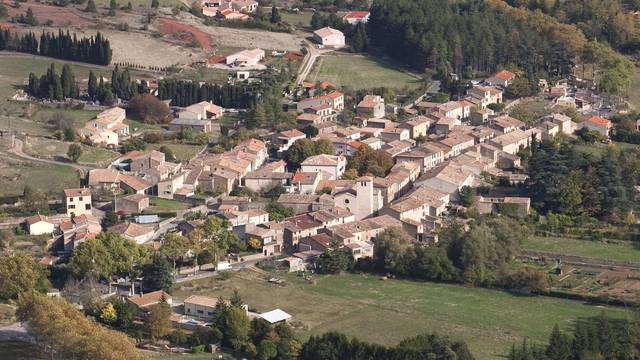 Like the castle, the village of Arques, with its buildings made of local sandstone, is separate from the green forests and pastures that surround it. As you walk through the streets of Arques, the urban planning of this 14th-century fortified village becomes clear, with its regular, quadrilateral islets. Next to the church, the Maison Granger has preserved part of its Medieval façade. 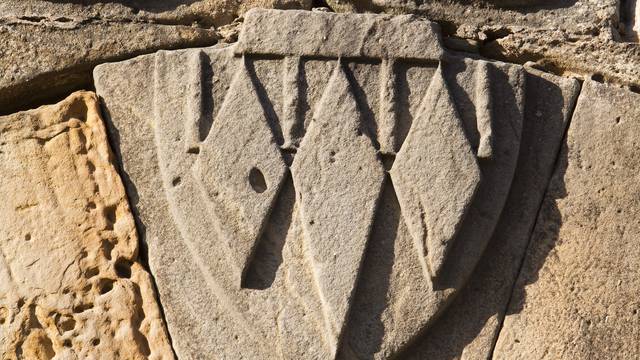 The bell tower of this church is actually a 12th-century seigneurial tower that has been raised a level to house the bells. In one of the side chapels is a key stone decorated with the Voisin crest. A 14th-century polychrome stone sculpture, depicting Saint Anne, the Virgin Mary and Child, is prominently displayed. 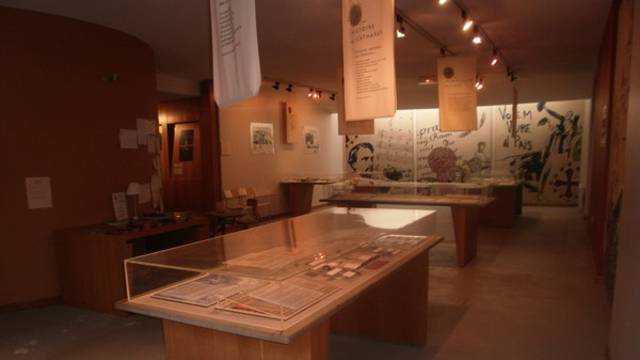 Déodat Roché (1877-1978) was one of the first intellectuals to begin research into Catharism. This unique individual gives a personal view of Catharism, which he develops over many pages. A permanent exhibition devoted to Catharism and its interpretations can be found in his family home. The visit is combined with a visit to the château. 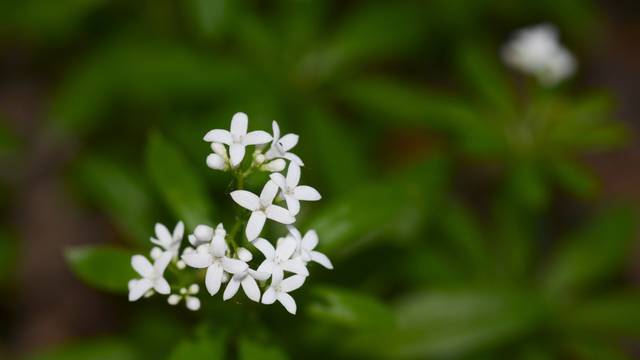 In the middle of the 19th century, devastating floods destroyed the forest of Rialsesse, which borders Arques. The 'Eaux et Forêts' undertook a vast re-foresting programme, introducing exotic species, which can now be seen in the Planel Arboretum. There are various walking trails through the forest, where the 'aspérule lisse' is hidden - a rare plant, whose star-shaped white flowers shine in the undergrowth from the beginning of summer. 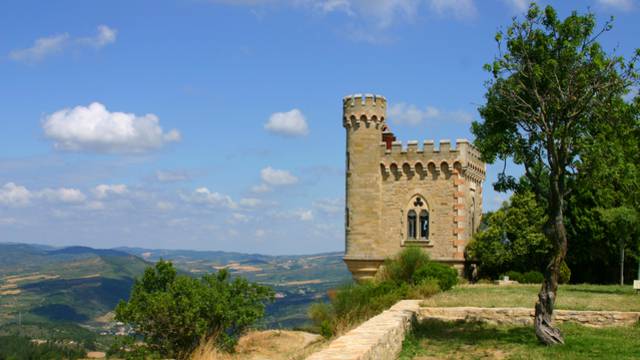 During the Early Middle Ages, Rheda was an important settlement after which the surrounding countryside - the Razès - is named. On its rounded 'pech' (hill), opposite Bugarach and the Pyrenees, the silhouette of Rennes-le-Château can be seen from afar. A small mountain pass leads to the village car park, where an incredible view of valleys and mountains await you. However, it's not the beauty of this marvellous landscape, nor the charm of these traditional narrow roads that attracts 120,000 visitors every year. No, it's the fascinating mystery of the fortune of the Abbot Saunière. Hidden treasure? A pact with the devil? It's up to you to solve the mystery... (Find out more). 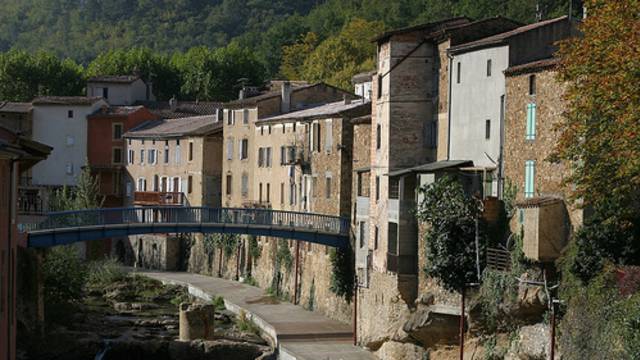 These thermal springs were harnessed by the Gallo-Romans in their large spa, containing two floors, four pools and two pools with duo-toned mosaics. It remains a popular destination for its specialisms in rheumatology and osteoarticular problems. In the pool, the natural warm water (31°C - 34°C) guarantees a blissful bathe. In the square, plane trees provide shade for the village terraces. Underneath runs the River Salz, a salty river whose source is accessible via a path departing from Sougraigne, a village near Rennes-les-Bains. The water from this spring contains up to 5x more salt than seawater. Previously a popular spot for smugglers, the path follows in their adventurous footsteps... 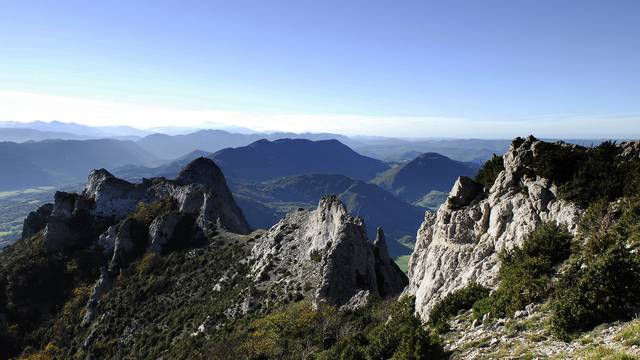 En route to Peyrepertuse and Quéribus from Rennes-les-Bains, as you turn around a bend in the road, the magnificent peak of Bugarach suddenly rises up in front of you. As the only mountain that is 1231m high, the Peak of Bugarach overlooks the whole region, providing a beacon and point of reference. Emerging from the Fenouillèdes, it can be seen for miles on the road from Toulouse. It is globally known as the 'upside-down mountain', where some people search for mysteries and sacredness. For others, it is a place of unforgettable thrills, when they peer over its 'nose' to see under their feet the most incredible countryside in the Aude. The descent into the village is a good way to relax after a long, but manageable, ascent. In this little mountain village, you can find delicious food, an art gallery, a picnic lake and, slightly further away, the Cathar Trail.

Arques and Saint-Louis de Parahou are the only fortified towns in the Corbières. When the Voisins family decided to expand the village of Arques at the end of the 13th century, the new district received the name of 'bastide', or 'fortified town'. The lord attracted new residents with favourable conditions for clearing the land, grazing livestock and using the wood. In 1329, at the request of their lord, the inhabitants obtained the right to organise fairs and markets. Arques thus became a lively market town. 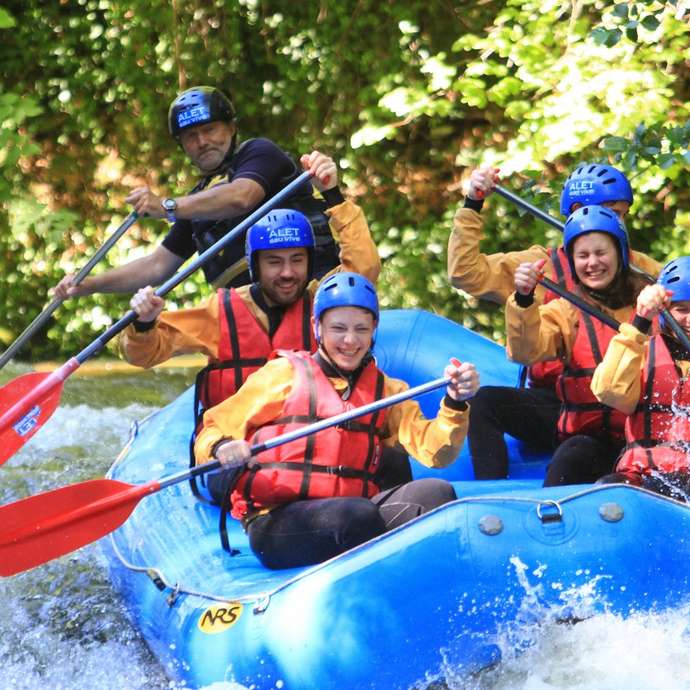 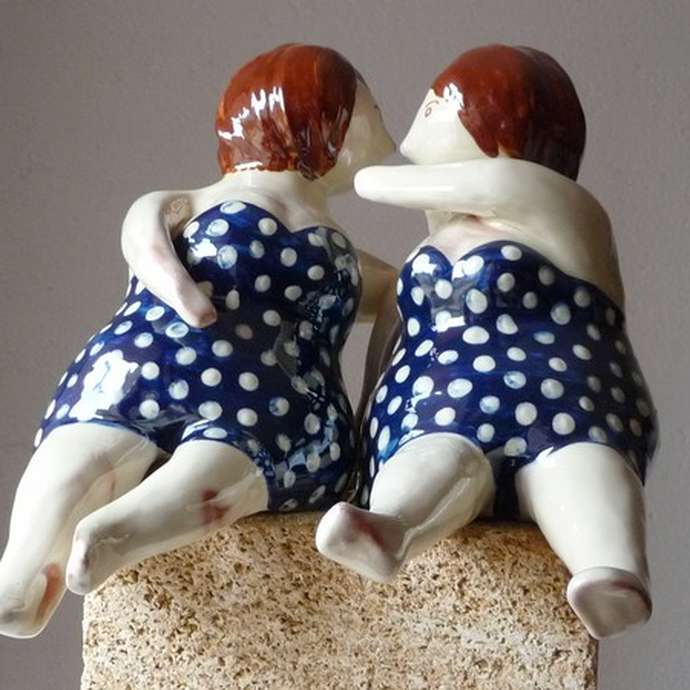 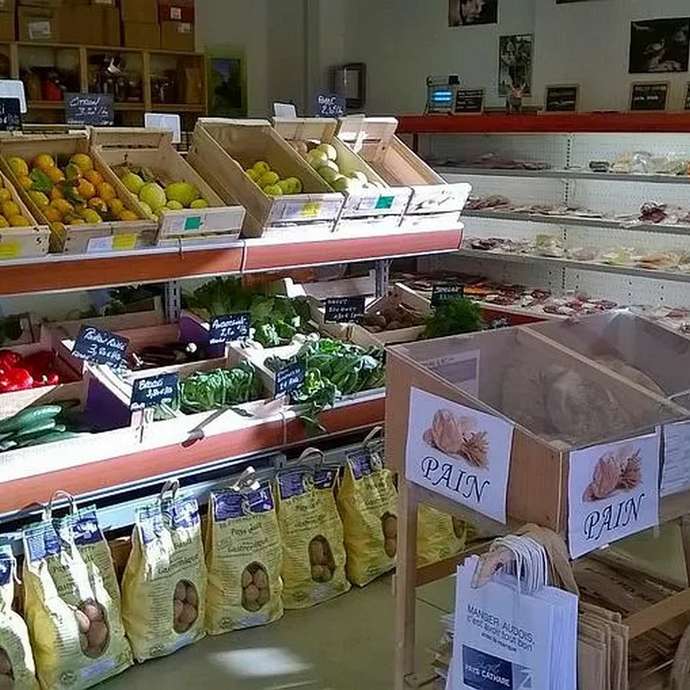 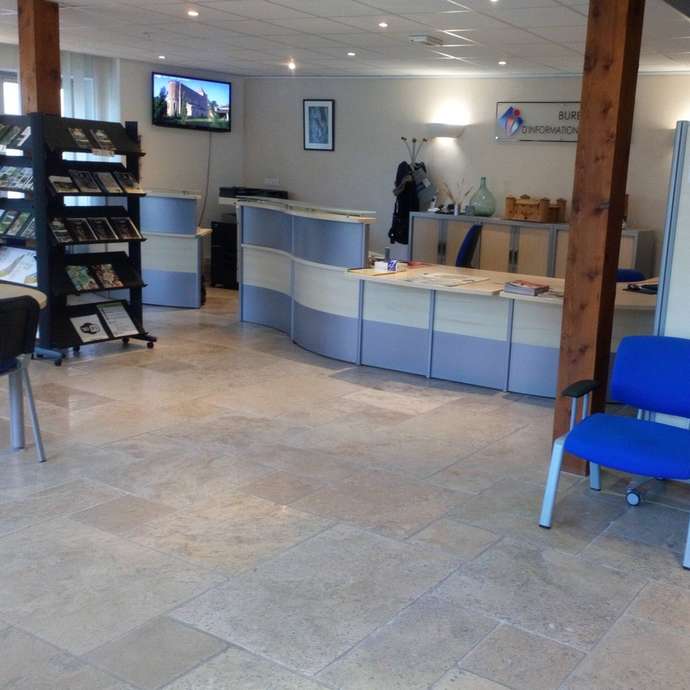 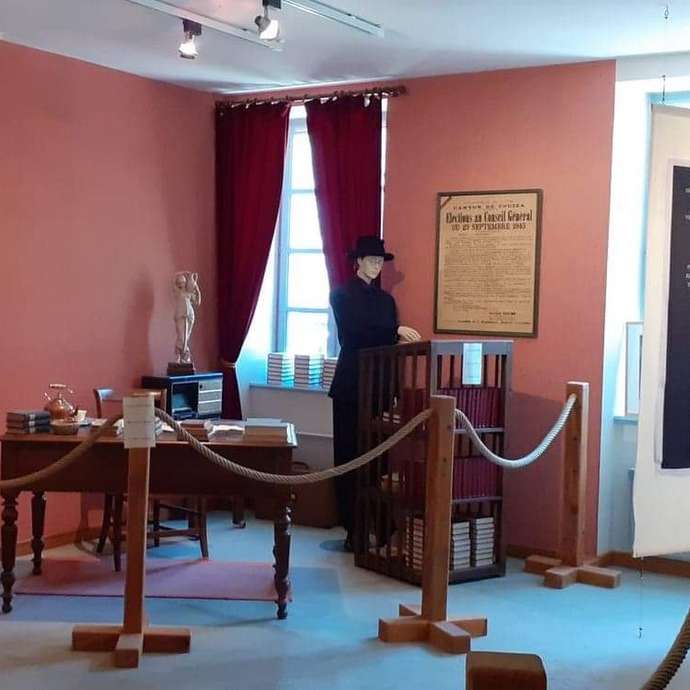 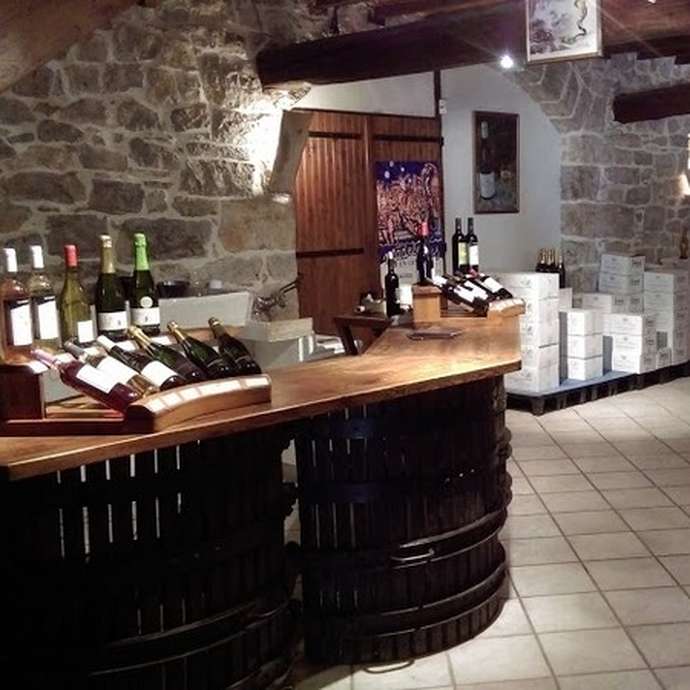