The bell tower of Fanjeaux is a 360m-high beacon in the landscape, which can be seen from all over the Lauragaise plain. The roads, with their enchanting gardens, reveal the rich history of this city. This place, located right in the heart of Cathar Country, is where Simon de Montfort and St Dominic decided to lead the fight against heresy.

In 1131, Fanjeaux was a powerful fortified village. Frequented by its lord, the Viscount Trencavel, and various nobles, it was a welcoming city for the Cathars. Bishop Guilabert de Castres had a "maison de parfaits" here, where Cathars would live. Weavers made a living by working in communal workshops. From 1206, this is where Dominique de Guzman chose to stay,  preaching to convert non-believers. He clashed with Guilabert de Castres during a theological "dispute" in either Montreal or Fanjeaux, according to chroniclers. He founded the Prouilhe monastery in 1207, before founding the Dominican Order (Order of Preachers) ten years later. However, the debate gave way to the violence of the Albigensian Crusade. In 1209, Simon de Montfort set up his headquarters in Fanjeaux. After Dominic's death in 1221, the Dominican monks participated in the Inquisition. In the middle of the 15th century, the village became rich, thanks to its woad plantations (a flowering plant used to produce indigo dye). During the French Revolution, the Dominican monks were dispossessed. Today, there are 5 active religious communities in the city of Saint Dominique.

There is a marked path, which starts from the Tourist Office. Educational for adults and fun for children, this walk invites you to learn about the history of this medieval city and provides a proper treasure hunt. The walk includes roads interspersed with flowers and beautiful façades, a path lined with cypress trees, impressive crosses, a magnificent wash house, extraordinary countryside and charming secluded spots. 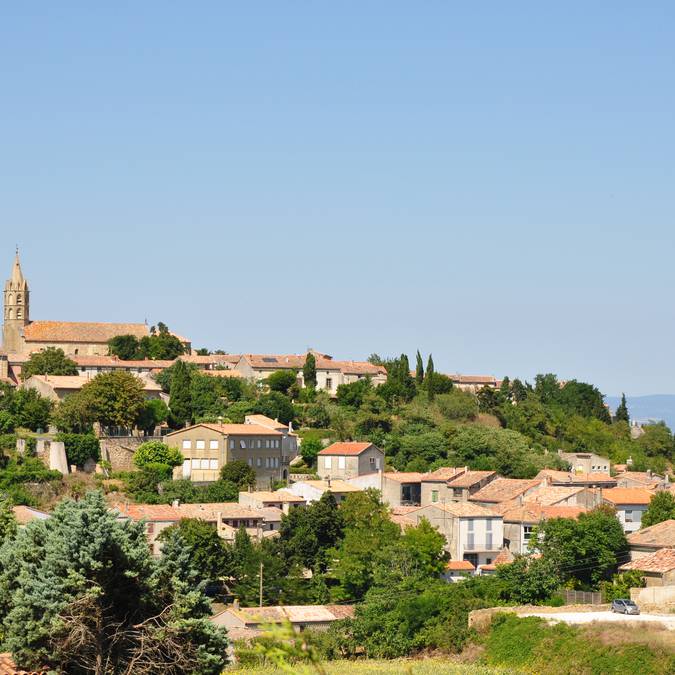 Founded in the 14th century, the Dominican Order Convent is currently home to Dominican Sisters of the Holy Family. At the end of the Convent's garden, the remains of the "Miracle" House recount an episode in the life of Saint Dominic recorded by one of his contemporaries, the chronicler Pierre des Vaux de Cernai. During the "dispute" in Montreal or Fanjeaux, works by both the Cathars and St Dominic were thrown on the fire, with the books of the latter being miraculously carried away from the flames three times. The anecdote, written down later, reports that the parchment would have burned a beam in the roof, which has been revealed since 1820 in the parish church. 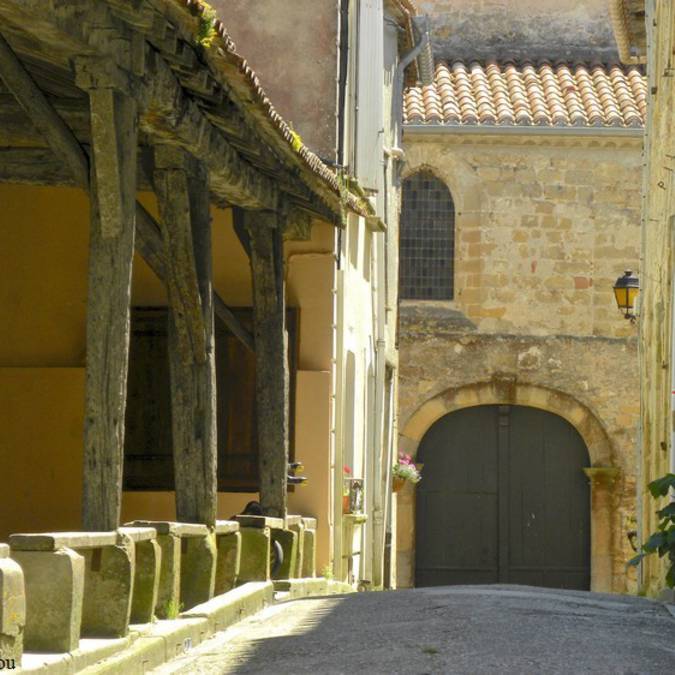 Classed as a historic monument, Our Lady of the Assumption is a superb example of the southern French Gothic style at the end of the 13th century. The opulence of the interior is striking. Everything here exudes elegance, from the magnificent Baroque choir stalls, to the a thirteenth-century wooden Virgin with Child and the font made from Caunes-Minervois marble. On the outside of the church is a mighty octagonal bell tower topped with a triangular arrow, which can be seen for miles around. Walking around the church, you will arrive at the site of the temple of Jupiter. A block of white stone embedded into a portion of the eastern end of the church is possibly a memorial to the ancient temple which was once here. 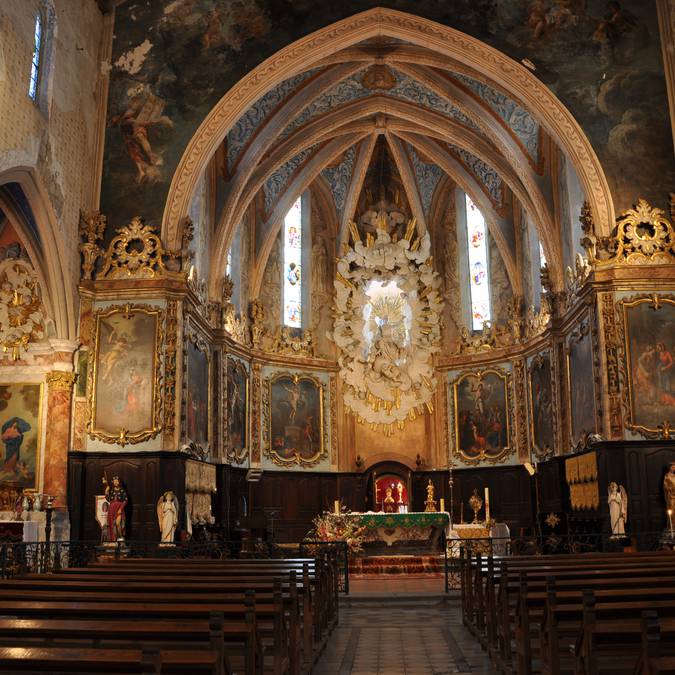 The district has kept same name since 1328: "le Borguet Sant Domenge". A sloping path departs from the eastern end of the church, and goes down towards Saint Dominic's House and its sculpted wooden door. This is where the Dominican Monks remember the founder of their Order. On display are some impressive objects, such as an early-Renaissance fireplace, and stained-glass windows signed by the great-nephew of Victor Hugo. These stained-glass windows, dating from the beginning of the 20th century, recount important episodes in the life of Saint Dominic. 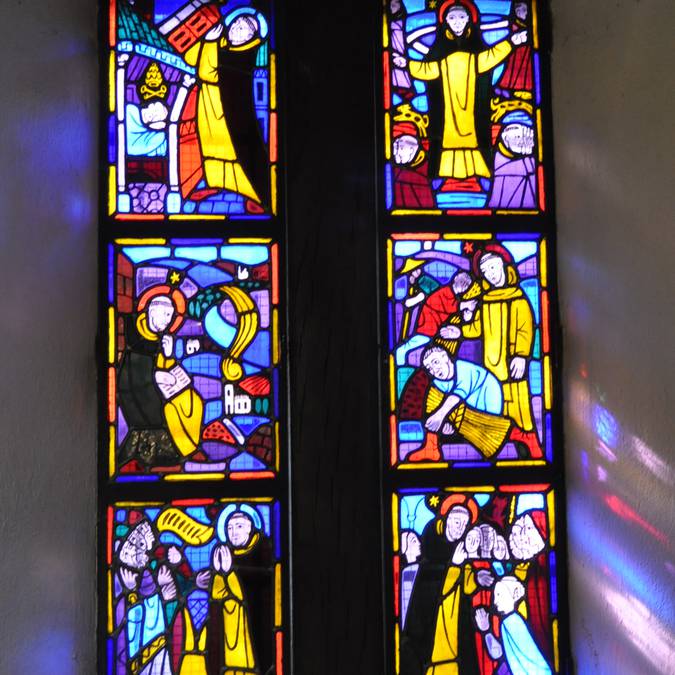 At the end of the village, at the top of the steep hillside, this viewpoint is an ideal place for contemplation and awe. The countryside spreads out in all directions, rough or smooth, endless or blocked by mountains. Amongst the undulating cultivated fields, the summit of Bugarach rises up in the distance, as an outpost of Corbières. Ceramic tiles on the parapets point out the mountains, hills and villages. This headland takes its name from "Seignadou" from "signum dei", the sign of God. This is where Saint Dominic had the vision of the ball of fire falling on Prouilhe down below. His statue dominates the small courtyard. 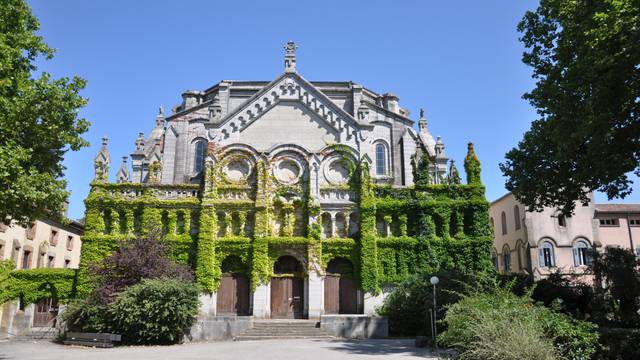 The convent can be seen from the Seignadou, and reached on foot along a downhill path. In the winter of 1206-1207, Saint Dominic founded an establishment for 9 Cathar women who had converted to Catholicism. With the support of the Pope, the convent received up to 160 nuns in 1340. The new convent was completed at the end of the 14th century, and was comprised of an outer wall with 15 towers, 2 cloisters and 2 churches. However, a fire destroyed it in 1715, and it became a stone quarry after the French Revolution. The current basilica was built in the 19th century. The convent is currently home to around 30 nuns, and welcomes both anyone seeking calm and comfort, regardless of their faith (or none). 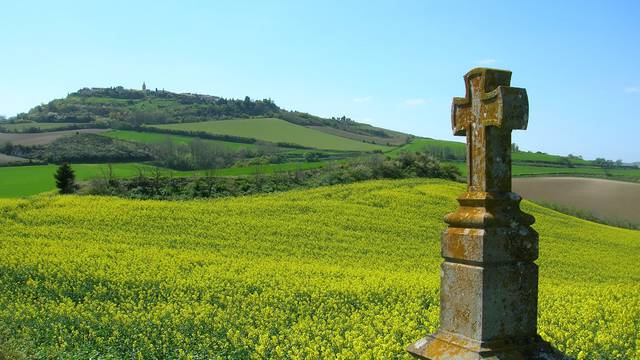 Here, wheat, rape, sunflowers and moors have replaced the vineyards of Razès. The hills roll into the plains, or wind towards the Piège and the heart of Lauragais. The medieval village of Laurac, after which 'Lauragais' is named, is spread out along the whole hill. Slightly further away, along the edge of a narrow road along the Hers Mont, the Chapel of Saint Christol de Fonters-du Razès conceals an apse with Lombard arches in the middle of cyprus and pine trees. At Cazalrenoux is a fortified Roman church overlooking a series of valleys. Numerous walks set off from these unmissable corners of Occitania.

Opposite Fanjeaux, on the other side of the Limoux road, is the monumental bell tower of the Collegiate Church of Montreal, from which you can enter into the Malepère mountains. This Natura 2000 zone plays an important role in bat conservation. In the woods at the centre, you can see all sorts of oak trees. It is surrounded by a famous vineyard that is planted 350m high, which thrives in the climatic influences of the Mediterranean in the south and the Atlantic to the west. In July and August, 'Thursdays in Malepère' allow you to learn more about the Malepère appellations, with musical and gourmet wine-tasting in the different estates throughout the mountains. 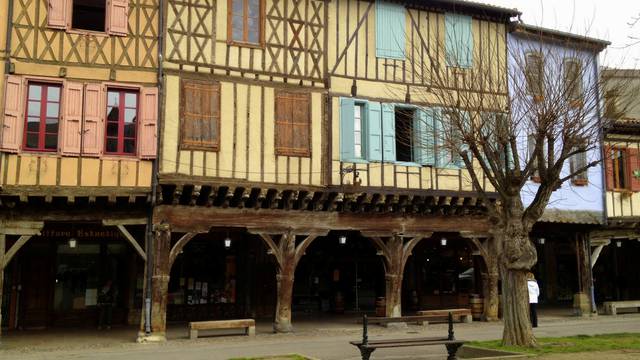 Women in traditional head-dresses, a bearded head, a tortoise... be amazed by the strange characters watching you. You are in Mirepoix, on the main square facing the Maison des Consuls, with its intricately sculpted joists. Surrounding you are warm-toned timbered houses supported by wooden galleries, well-shielded from cars. Below, workshops, galleries and cafés invite you to wander around endlessly. On Mondays, the square is full of activity as people come to enjoy the market. Not forgetting the streets that surround the cathedral, whose 60m-high elegant spire marks the centre of this 13th-century Medieval fortified town. 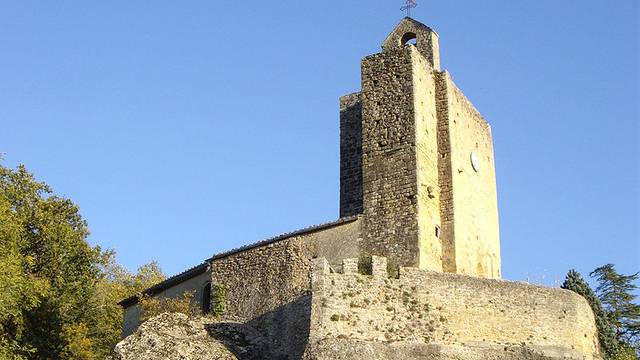 A surprising troglodyte church is hidden in Vals, a peaceful nearby village. Nothing can prepare the visitor for what awaits behind the huge door of the high, fortified building. As you walk down a spiral staircase into the rock, you will be greeted by 10th-century frescos: an unforgettable and moving moment that will leave you awe-struck. In Camon, a small fortified village with a few ramparts and a castle, the roads are coloured by roses. The majestic ruins of the nearby Lagarde Castle takes all the attention, even with the Pyrenees close by... 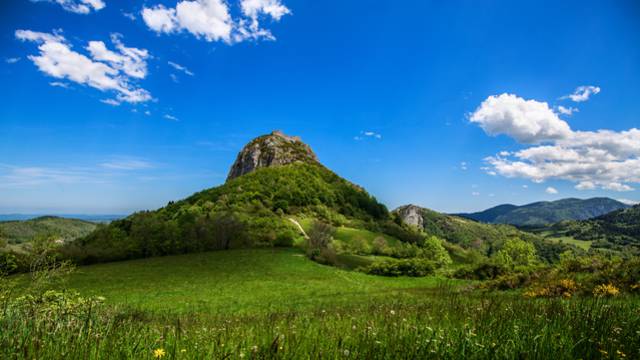 Its very name recalls the Cathars and their martyrdom. Montségur was the 'seat and the capital of the Cathar Church' from 1232. 500 to 600 people lived in the castrum near to its ramparts. In 1244, after 11 months of siege, the ascetic citadel was captured. 225 Cathar men and women were killed, including the famous Esclarmonde, the daughter of Raymond de Péreille, the Lord of Montségur. Defiantly perched on its 'pog' (pronounced 'poutch'), the 1207m-high fortress continues to awe visitors to this day, as they take the same steep path as the Medieval castrum dwellers. Archaeological excavations took place a few years ago next to the castle, of which some of the findings are displayed in the Montségur Museum, classified as a Museum of France, and located in the modern village (find out more). 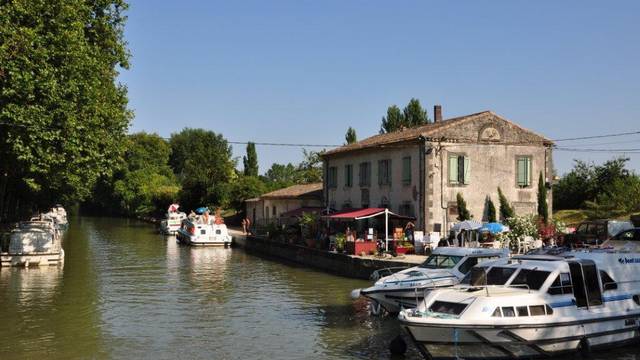 Bram is a little town with a lively cultural scene. It is the home of Eburomagus, an large archaeology museum that displays local archaeological discoveries, and supports the daily work of archaeologists. Another popular destination if the Centre des Essarts. Supported by both local and national institutions, such as Le Jeu de Paume in Paris or the Château d'Eau in Toulouse, the Essarts is a dynamic photography centre. Regular, high-quality exhibitions are held here, as well as a variety of cultural events, including music, painting and talks. Finally, the centre of the charming circular village opens onto a road lined with plane trees with a cycle lane and pedestrian footpath, which will take you to the Canal du Midi.

'Fanum Jovis' or the 'Temple of Jupiter' was the original name of Fanjeaux. On this mountain, rare archaeological discoveries have confirmed that people have lived here since the 1st century BC. The temple, located just behind the current church, allegedly had a basin that transformed into the 'lake of Jupiter', via the magic of pomposity... According to legend, at the bottom of this lake, a stone bears the following inscription: 'If you remove the stone, Fanjeaux, you will perish in the water'... 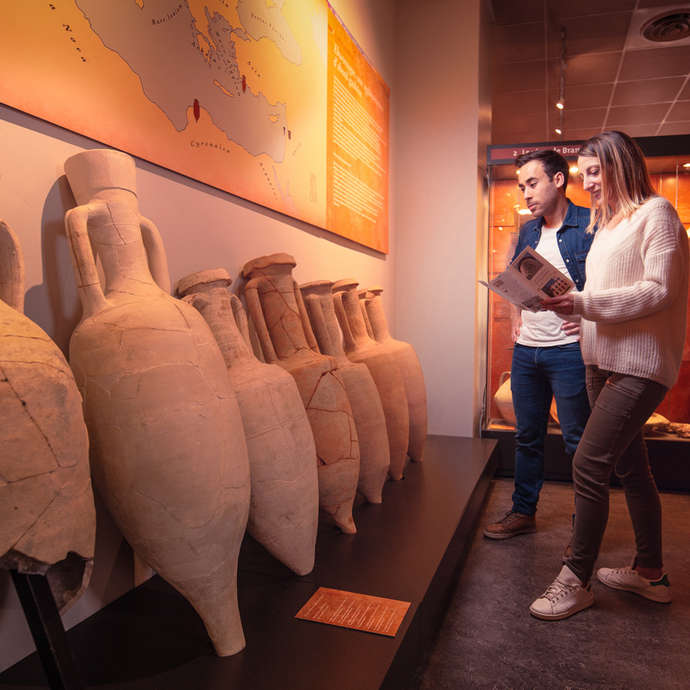 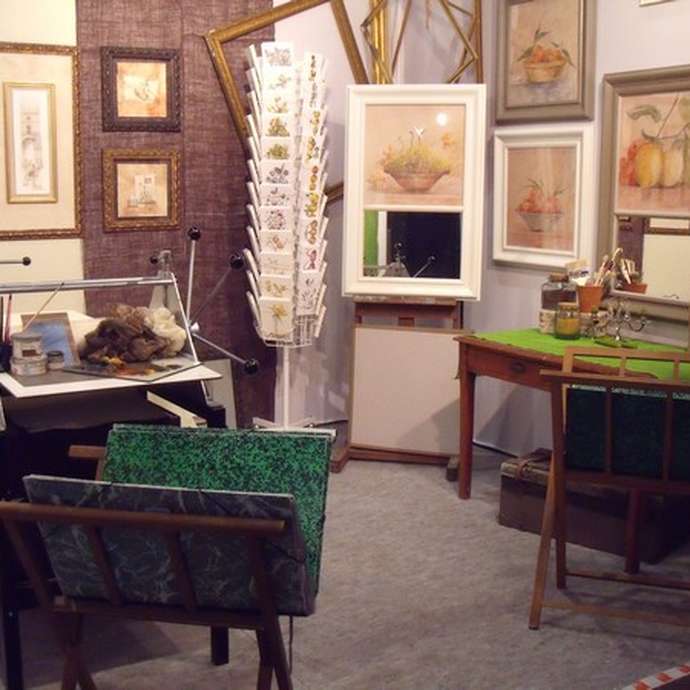 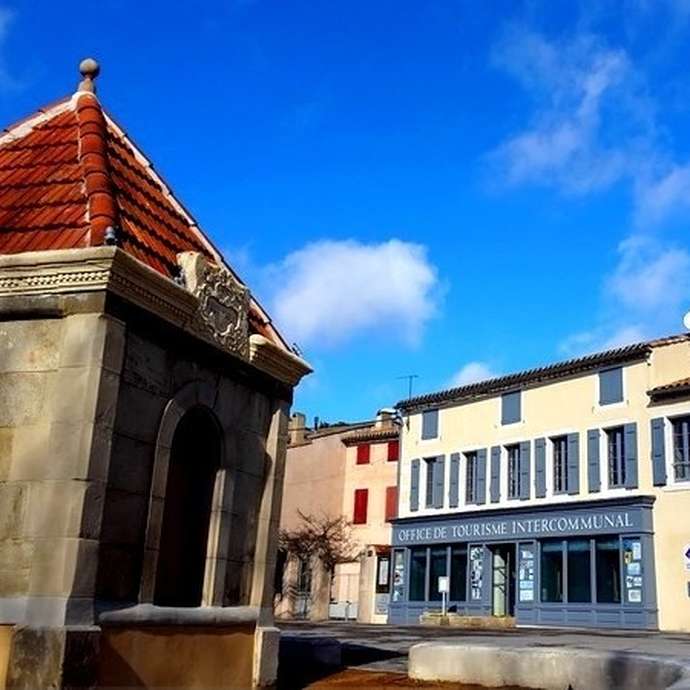 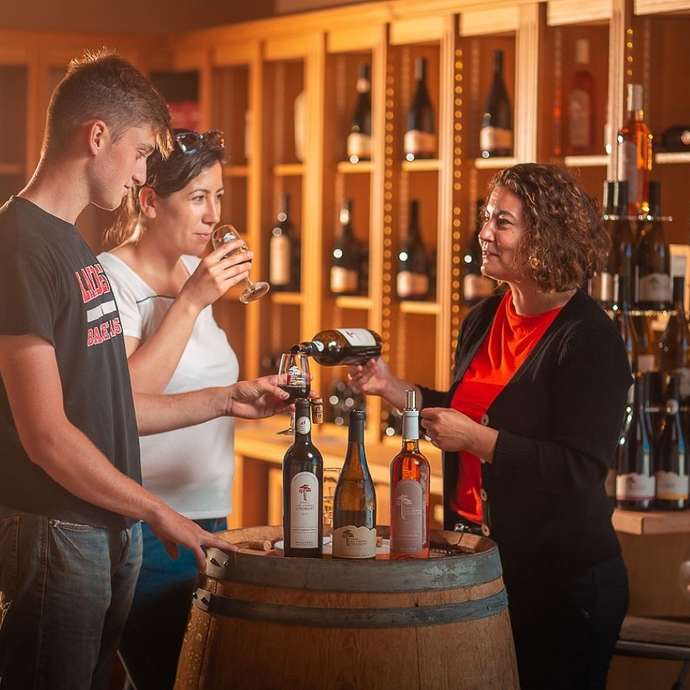 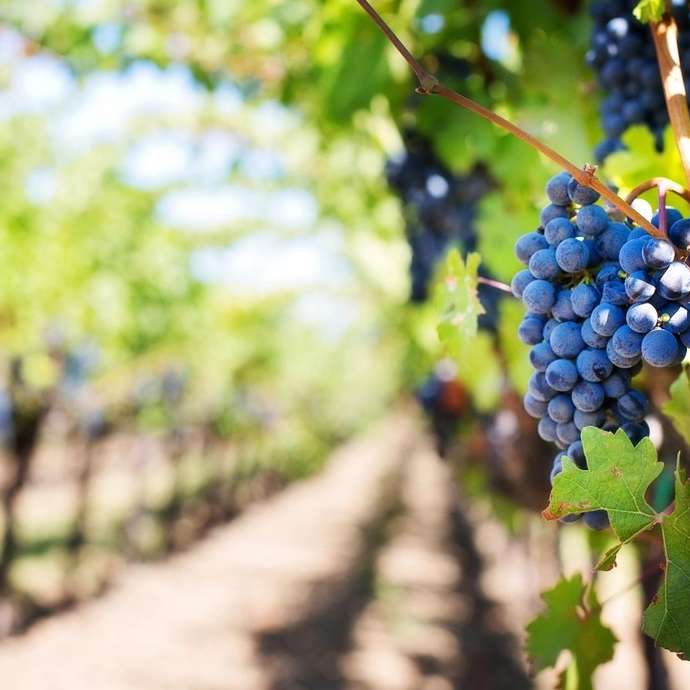