An important and colourful site

In this small valley surrounded by steep hills on the banks of the river Orbieu, the largest Benedictine Abbey in medieval Languedoc once prospered. On the other bank, opposite this imposing silhouette, an award-winning "Most Beautiful Village in France" invites you to discover its riches and larger-than-life treasures...

Under the protection of the Carolingians since the second half of the 8th century, and richly provided for by Catalan counts in the 11th and 12th centuries, Lagrasse Abbey became one of the most powerful Benedictine abbeys in Languedoc. Its abbot was also the lord of an important market town, founded in the 13th century on the other bank of the Orbieu. He had to negotiate with mayors ("consuls"), who represented the villagers, to organise the city life. The Abbey was weakened by the Albigensian Crusade, and raids by the Cistercian and Templar monks. In 1279, Abbot Auger de Gogenx restored the Abbey to its former glory and entirely remodelled it. The town and Abbey were transformed to face the turbulence of the 14th and 15th centuries. At the end of the 16th century, the monks, sons of local minor nobility, no longer respected the Rule of St Benedict. In 1662, they refused to respect the authority of the Maurists, who had been tasked with reforming the Abbey. The Maurists eventually restored order, and directed the Abbey until the French Revolution. Following the Revolution, the monastery was divided into separate secular and religious parts.

Overview of the Abbey

After the construction of the abbatial palace by Abbot Auger de Gogenx in the 13th century, with modifications made in the 16th century, the monastery radically changed in the 17th and 18th centuries due to the Maurist reform. The Abbey is predominantly built in the medieval style, with traditional workmanship for the main buildings, except for the Gothic church and its three Roman apse chapels. 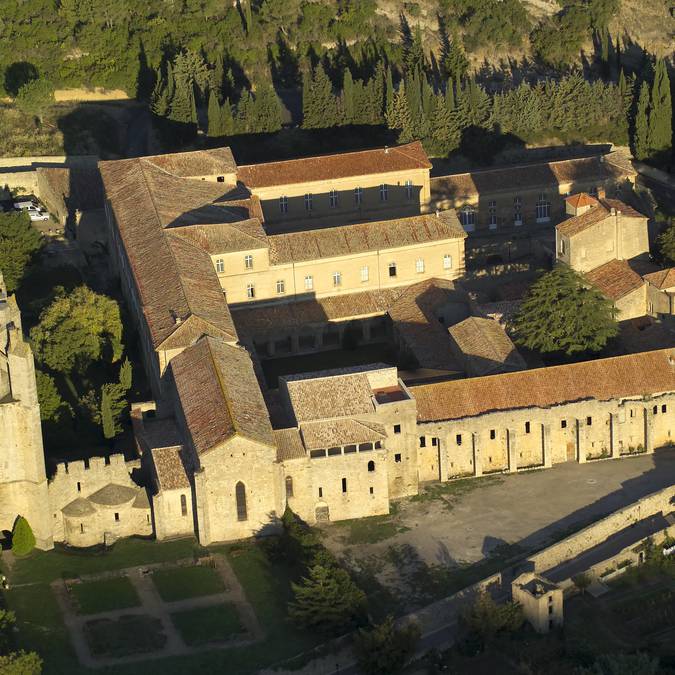 This area was designed by the Abbot Auger de Gogenx, and is arranged around an elegant courtyard. A gallery supported by nine columns topped with capitals, leads to the back rooms, and, upstairs, the abbot's private rooms. A magnificent 16th-century fireplace takes centre stage in the state room, and the private chapel reveals its two levels... 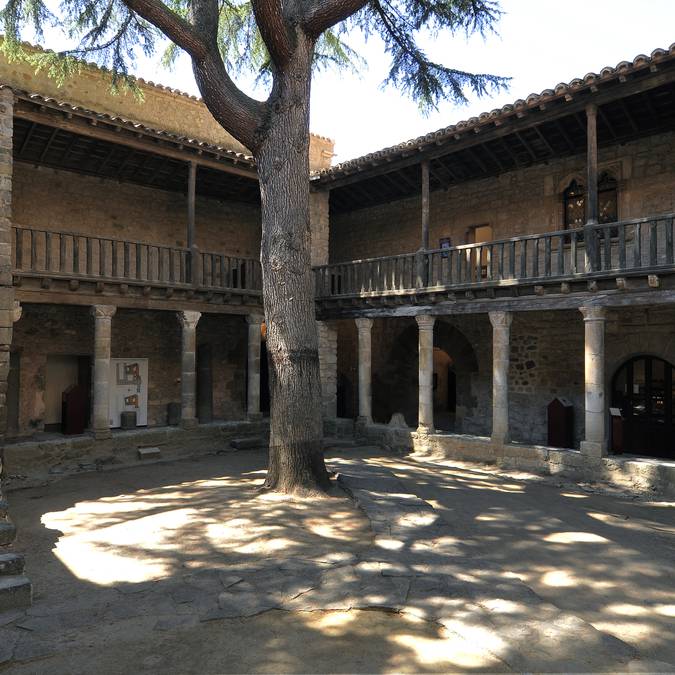 The lower entrance to the Chapel still has its vaults painted with Auger weapons, crossbreeds and a carpenter. On the first floor, the walls of the Chapel are decorated with a Tree of Life and a scene from Judgement Day. On the floor, varnished tiles in alternating colours depict zodiac signs, hunting scenes, fleurs-de-lis and roses. In the choir stalls, the finely-sculpted piscina will catch your eye: this basin collects the sanctified water used by the priest to purify the chalice. 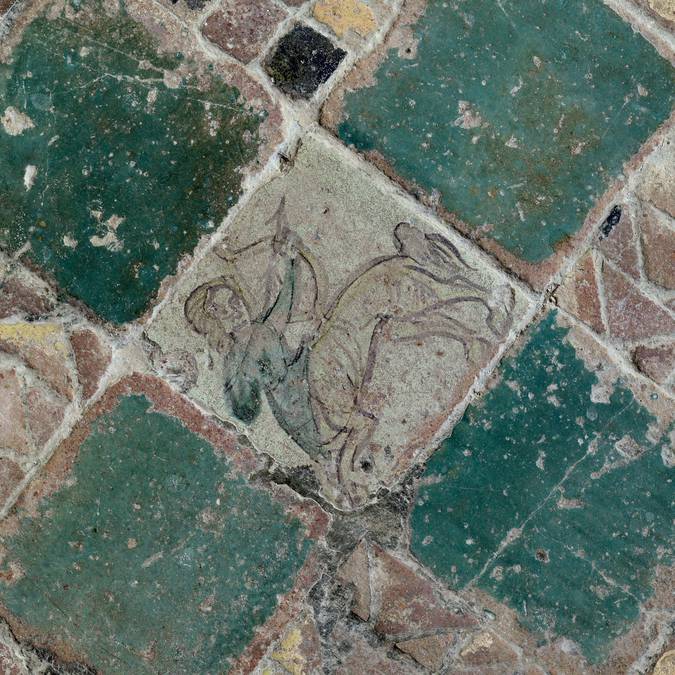 The twelfth-century white marble doorway has fourteen components, which bear the signature of the Master of Cabestany. The recumbent statue of Auger is the work of a sculptor from the Narbonne Cathedral, during the 13th century. This recumbent statue was used as a pipe: the severed head is kept with the canons of the Abbey. 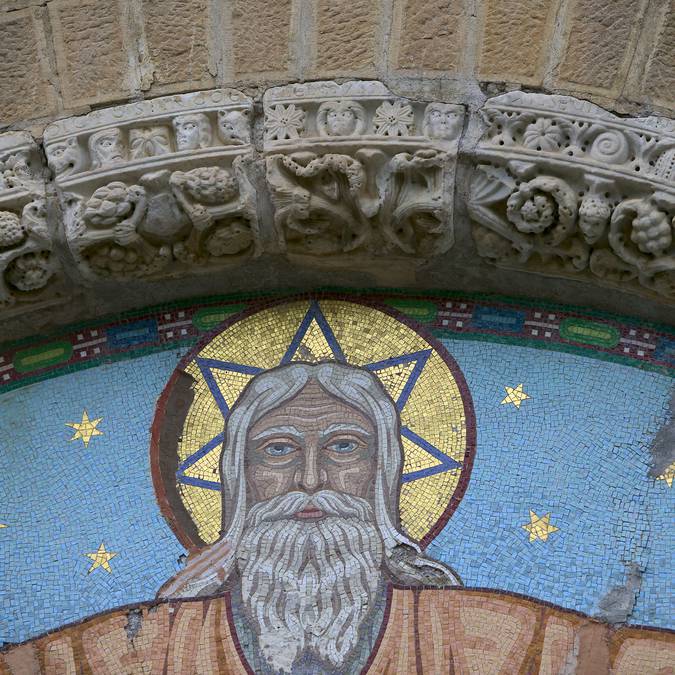 The dormitory, built at the beginning of the 14th century, is a magnificent, two-storey room, which, in the Middle Ages, was undoubtedly made in one piece. From the outside, its fortified appearance is due to machicolations (an opening to drop missiles or boiling liquid on the enemy) The bell tower was built by Philippe the First of Lévis, the commendatory abbot of Lagrasse and the bishop of Mirepoix, as a show of generosity. The cloister and the garden add a touch of sophistication, whilst the elegant ostentation of the "cour d'honneur" (a three-sided ceremonial courtyard) makes the Abbey look like a palace. 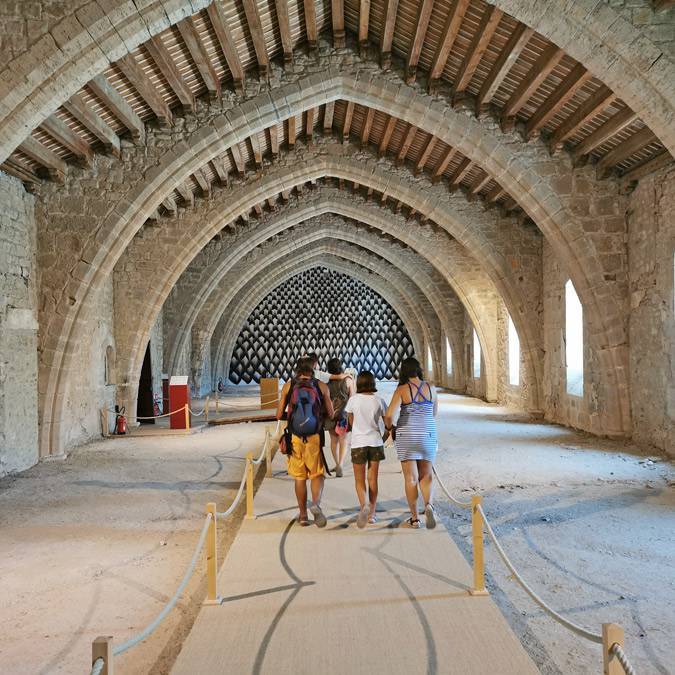 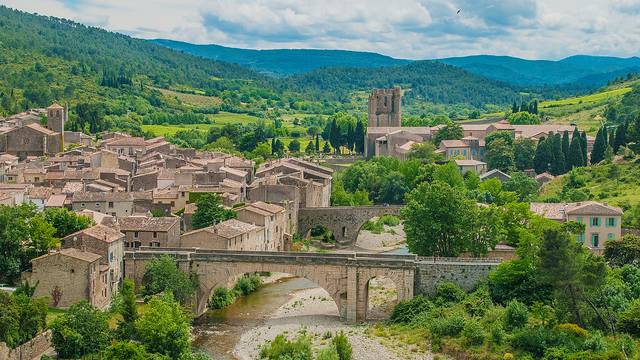 As you leave the abbey, cross the bridge over the Orbieu to reach the Medieval market town. This bridge, which used to have three towers, was built in 1308. With narrow roads and small squares, time appears to stand still. The large number of buildings classed as Historic Monuments, such as house façades, the church and the covered market, create a tableau from the Middle Ages to the 18th century, brought to life by craftspeople, cafés and shops. 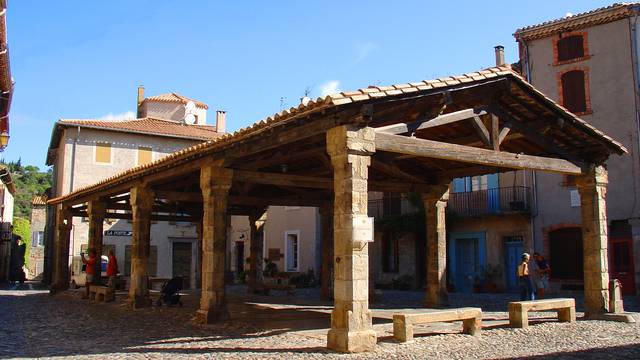 The Halle is a covered area supported by 10 stone pillars from the 14th-century, and is a lovely example of village architecture. Once it became a permanent fixture in 1353, the covered market caused the district to thrive, and it became the town's economic hub. During the 15th century, the residents of Lagrasse used their wealth to build large houses, sumptuously decorated with rich painted ceilings. 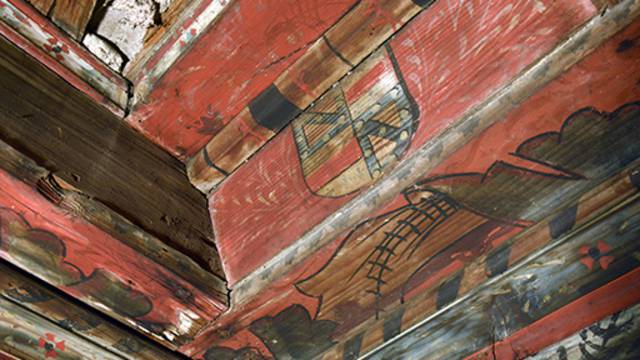 The painted ceilings of the former presbytery are an original and colourful example of this 15th and 16th century art, which has a strong presence in Lagrasse. It depicts bawdy scenes are brought to life, jesters dance. The Maison du Patrimoine, located here, also has a fantastic free exhibition of painted ceilings from Lagrasse and elsewhere. 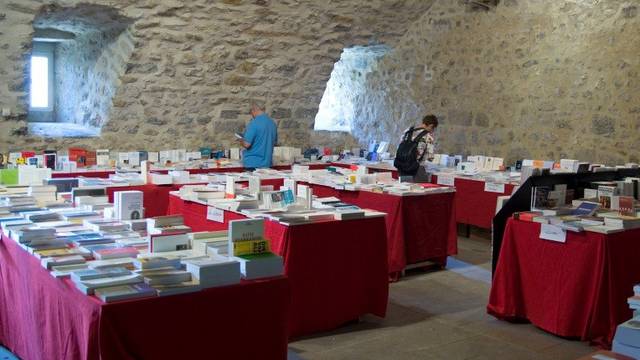 In the secular part of the abbey, la Maison du Banquet is a place for conversation: writing, literature and philosophy are at the heart of its festivals, meetings and workshops held throughout the year. A literary café and bookshop is available for anyone who wants to read, meet people or have a quiet cup of coffee. 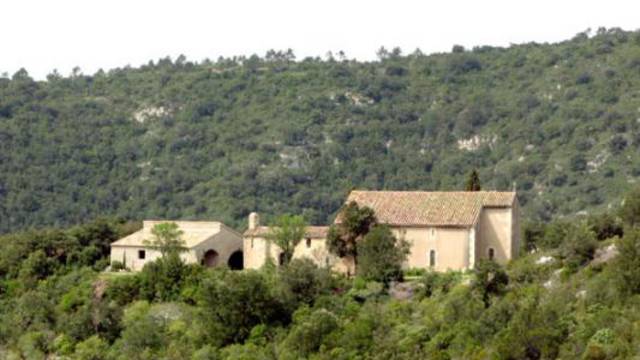 A spectacular walk leads to this little rural chapel, where you can enjoy a picnic. Setting off from Lagrasse, a path ascends through the cyprus and umbrella pine trees, before opening out onto a plateau full of shrub oaks and white stones. The surprising pile of the Faisses de Charlemagne, incredible 'capitelles' (dry stone shelters), gravel paths: this sun-soaked stony landscape leads slowly into a Mediterranean forest. Delicious scents fill the air. After the chapel, the return leg winds through arbutuses and white heather. A cyprus-lined avenue leading to a ruined farm allude to a human presence. Stop to admire the Pyrenees, before descending towards the abbey. 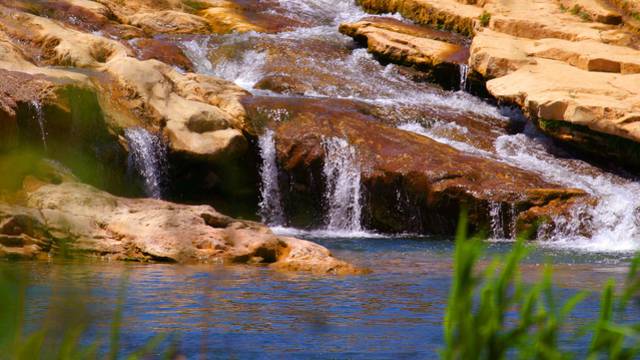 Just like Corbières, its source, the Orbieu is somewhat two-faced. Normally, it provides 22 villages with abundant 'blue gold'. However, depending on the season and rainfall, it can become stormy or dry up. It cuts a path through the Corbières, pierces the Montagne Alaric, before winding gently through the plains to feed into the Aude, of which it is the main tributary. Still young, the Orbieu carves out deep gorges. At Montjoi, a path leads below the cliffs to a 17th-century bridge crossing the river. After Lagrasse, at Ribaute, the river widens into limestone beaches, where currents make it a great spot for bathing. The Orbieu Valley is a Natura 200 protected area. Otters and hinnies find calm waters, whilst an eagle soars overhead in the blue sky... 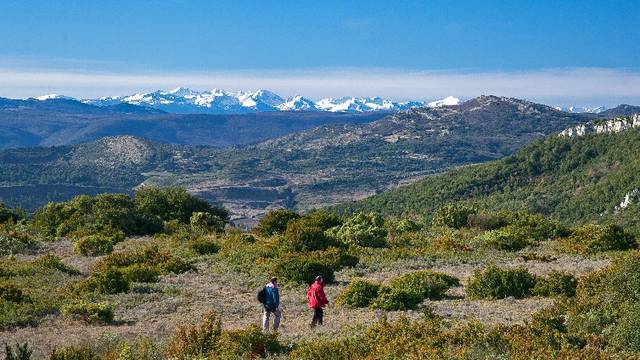 The foothills of the enormous, wild and mysterious Corbières mountains covers around 15km. This impressive rocky outcrop, covered in ravines and rocks, is a place of history and legend. The ruins of Miramont Castle bring you to Alaric II, a Visigoth King, and Chabert de Barbaira, a shy Occitan knight, as you survey Aude Valley, and the Minervois up to the Montagne Noire. The dizzying Roc Gris evokes the memory of the legendary Roland. Lost in the heath, the Roman ruins of the Saint-Michel de Nahuze Priory face the Cers winds. A path climbs to the top - the Signal d'Alaric - which is 600m high. Spiny jasmine blooms, the scent of thyme fills the air, the valleys are covered in dwarf green oaks... paths criss-cross a protected nature reserve that travels through time. 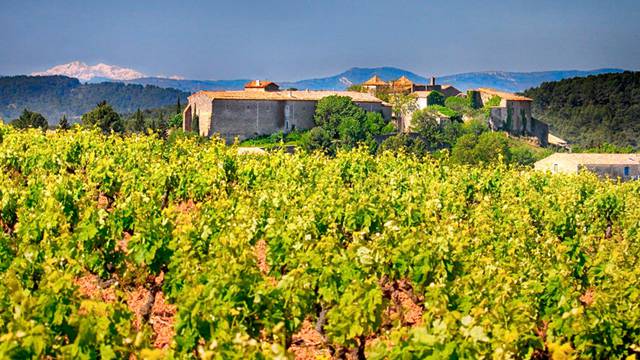 Experience:A nature getaway in the Corbières

Try a new experience, exploring by electric bike and discovering scenery to take your breath away. Swim, enjoy nature, visit a listed village, a gem of Cathar Country… Amid vines and garrigue, the region of Corbières invites you to meet the winegrowers, taste our wines and take some home to your cellar! (Find out more).

During the French Revolution, the abbey was divided in half and sold. One half, which is now the current monastery, was returned to the Sarrail family. Today, it is owned by the Chanoines Réguliers de la Mère de Dieu, a religious community. The other half, the abbot's palace, was bought by the Berlioz family. These residents of Lagrasse sold their half to the Oeuvres des Médaillés Militaires in 1928. A orphanage was established there, welcoming the children and grandchildren of decorated soldiers until the end of the 1970s. Today, some still come to share with us their moving memories of the warm welcome they received despite difficult conditions. A precious list of residents is available for those who want to find their friends. 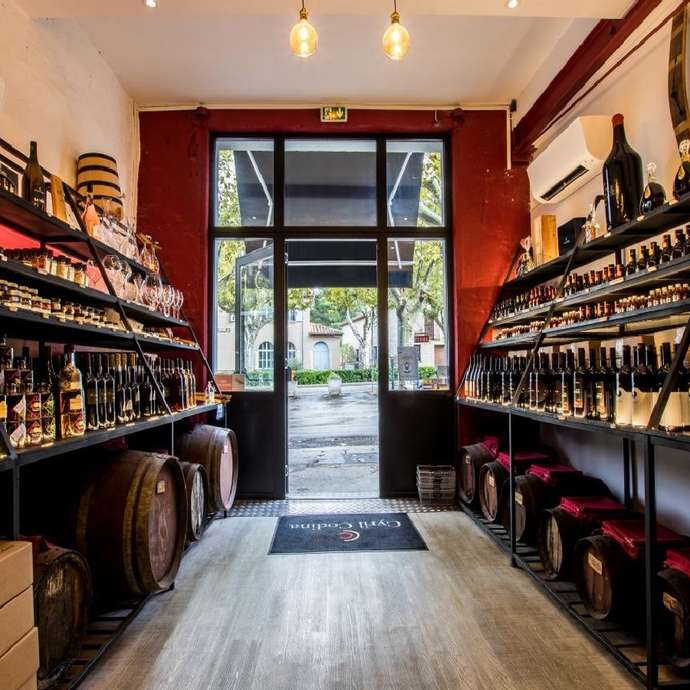 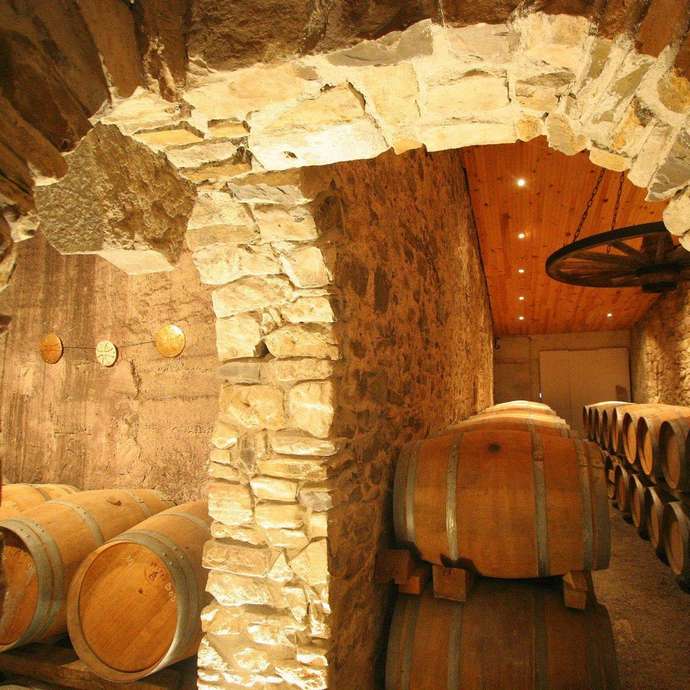 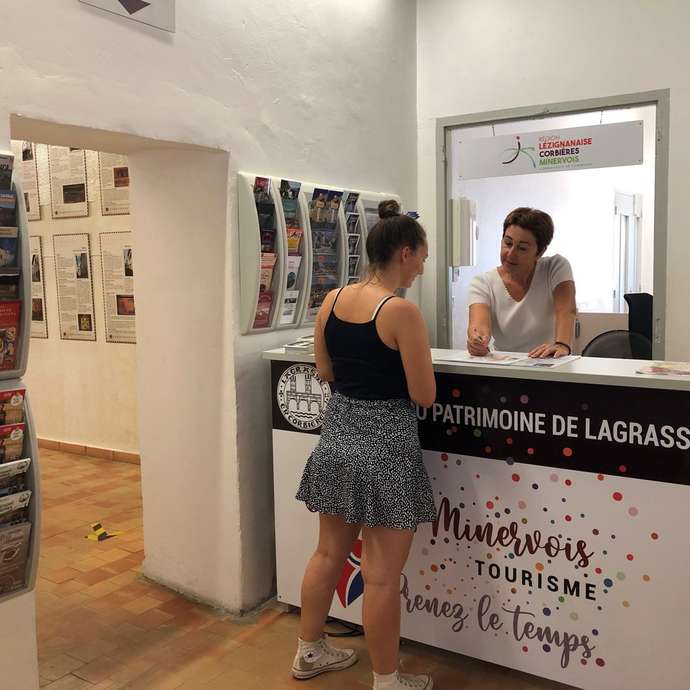