One overhang, 4 towers and 40 caves

Four royal fortresses join forces along a long, dry ridge which dominates the village of Lastours. The remains of the medieval village can still be seen on the slopes. This site is one- of-a- kind in France, where the history of Bronze Age settlers intersects with that of the Cathars, villagers, craftspeople and farmers... all seeking protection from this punishing mountain range.

Grégoire de Tours mentions Cabaret in 585, referring to the victory of the Visigoths over the Burgundians. In the 11th century, three fortresses were built: Cabaret, Surdespine and Quertinheux. In the 12th century, it was a powerful mining fiefdom, shared between various co-lords. A market was established, a sign of a prosperous economy, which developed at the same time as Catharism. In 1211, Simon de Montfort laid siege to this place, frequented by Cathar bishops from Carcassès. The lords of the area, led by Pierre-Roger de Cabaret, resisted for a long time, even after losing their castle, between 1229 and 1238. As with Corbières, the French king reinforced the defences of this newly-conquered region. The three feudal castles were refortified and the Tour Régine, a symbol of royal power, was built. The destruction of the original village in around 1240 has been discovered by archaeologists, who continue to reveal the extraordinary riches of the Lastours site.

Cabaret, from "cap aret", meaning "ram's head" in Occitan, has given its name to the Cabardès region. The castle is at the summit of the rocky ridge. Its curtain wall protects the "corps de logis" (main building) and a keep. Limestone blocks add a dash of white to the main tower. Upstairs, a lovely window looks out towards the west, whilst arrow slits everywhere keep watch... 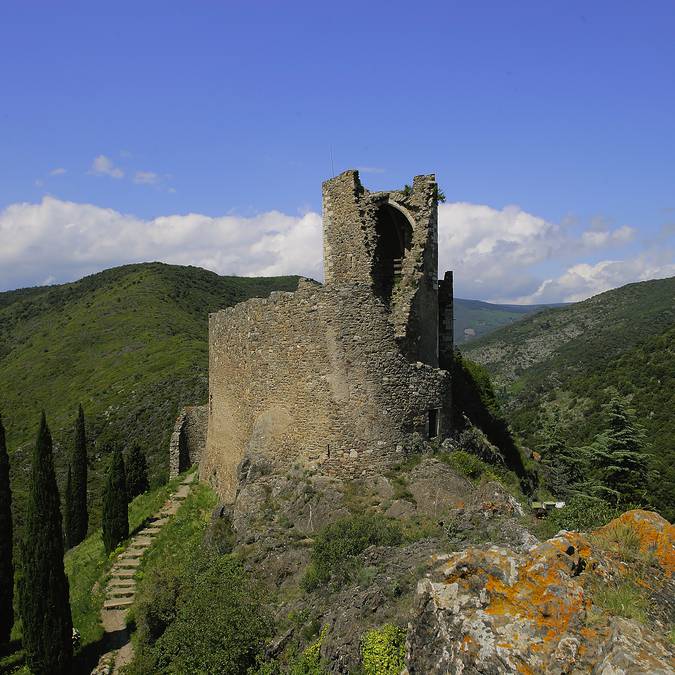 Simply majestic. This circular tower, flanked by a stairwell, has a very smooth outer wall. Like its neighbour Cabaret, the door to La Tour Régine is upstairs. Inside, the arrow slits and windows will immediately grab your attention, before your gaze settles on the impressive dome where the "voussoirs" (stones used to construct an arch) create a snail-shell pattern. 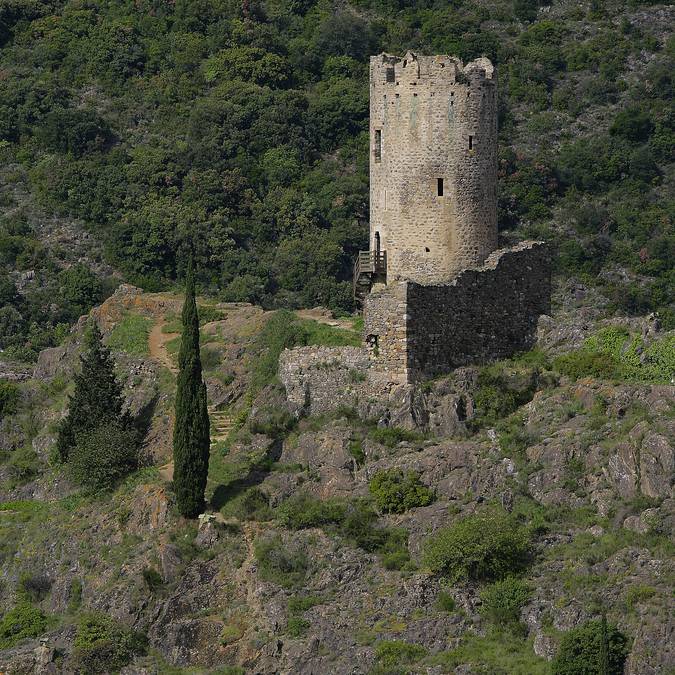 Before the refurbishment of Cabaret, Surdespine was the largest castle. Inside its outer walls, the main building is connected to a tower via a cistern, recognisable due to being coated with pipes. Inside the main building, four arched windows surrounded by limestone voussoirs look over a ravine towards the east. 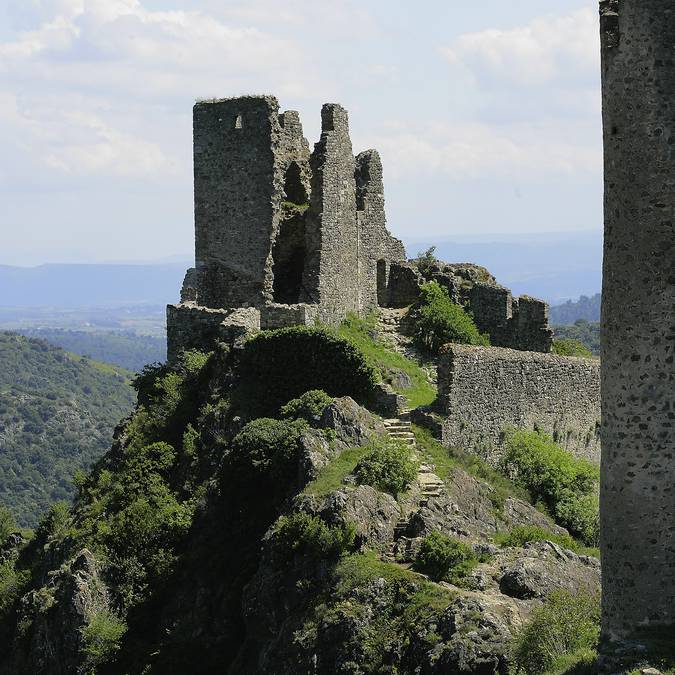 Located below the three other castles, Quertinheux looks like a real military outpost, surveying the scene, right up to the village. Its tower, main building, cisterns and outer wall are a mix of La Tour Régine and Cabaret. It is also associated with the biggest cave in Lastours - "the hole of the city". 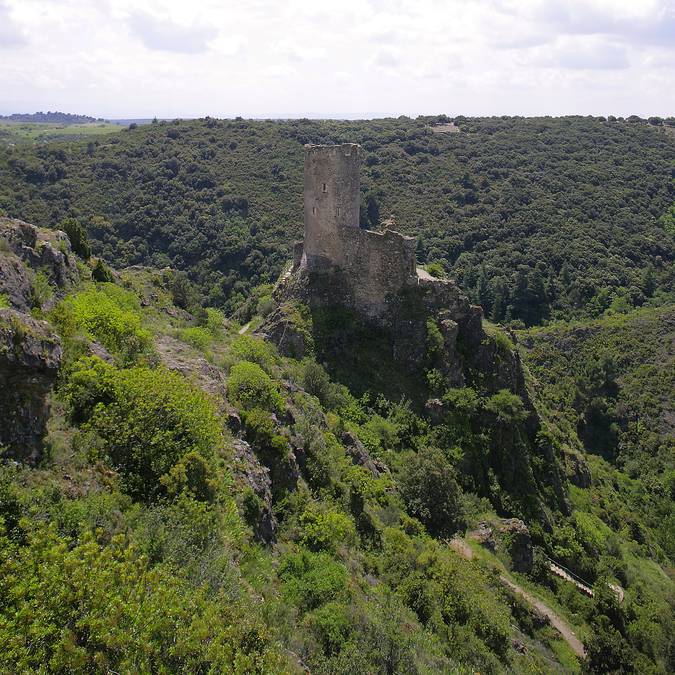 Archaeological excavations brought the fortified village of Cabaret back to life, revealing houses, forges, roads and a Roman church. Village life is relaxed, and is famous for its metalwork. Cyprus trees, planted in 1930, add their scent and height to this timeless stroll.

The visit begins in the reception area, located in the former textile factory on the banks of the Orbiel. Lastours was a prosperous village, containing a mine dating from Antiquity and textile industry from the Middle Ages to the 20th century. There are two exhibitions under the high chimney of the factory. '4000 years of history in Lastours' recounts the daily life of villagers through objects discovered during 30 years of archaeological excavations, including ceramics, tools and clothing accessories. The 'Flora and Fauna' exhibition will shed fresh light on your future walks, with its geological, zoological and botanical information. 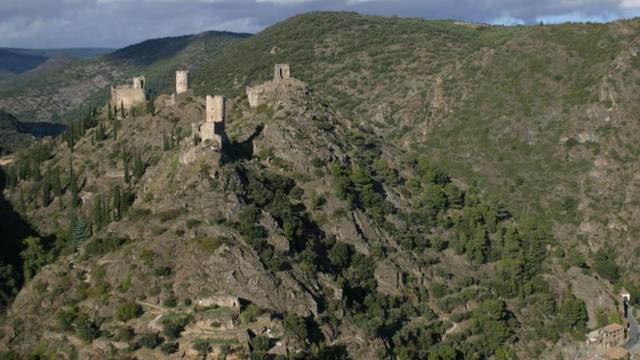 Go to the viewpoint for spectacular views over the Lastours mountain ridge and its 4 castles! This site has disabled access. You can book guided tours for this accessible site. The viewpoint is 2km from Lastours, and is indicated at the village entrance as you come from Carcassonne. 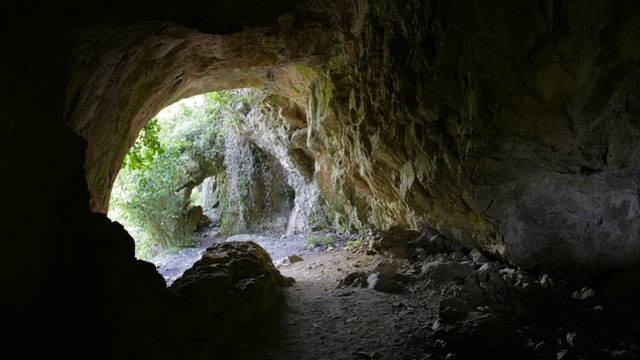 Lastours has around 40 caves, of which most have been secured, or even reinforced. The biggest is the 'Trou de la Cité'. This vast tunnel, renovated many times into a storehouse, shelter or sheep pen, was undoubtedly used as an underground room of Quertinheux Castle. It gets its name from a myth claiming that the tunnel linked Lastours to the Cité of Carcassonne. That is to say, the strength of the alliance between the lords of those premises and in Trencavel. In an adjoining cave, named the 'Necklace Room', archaeologists have discovered the tomb of a young girl from the Bronze Age, the 'Prince or Princess of the Necklace'. 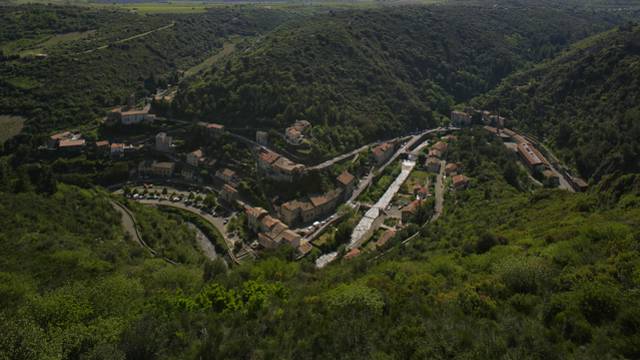 It has long been said that Orbiel means 'old gold' - an name that seems justified by the large mining industry in this area of the Cabaudès, where the Orbiel passes through. However, gold mining only affected a few municipalities, such as Salsigne, and is a very recent development. What Strabon called 'the extraordinary wealth of the Volques-Tectosages', was actually silver, iron and copper. And the Orbiel? Recent studies seem to suggest that this tributary of the Aude, running through the Montagne Noire, was named after the olive tree ('olivier' in French). The traditional olive tree plantations lasted until the 19th century, and have shaped the landscape. 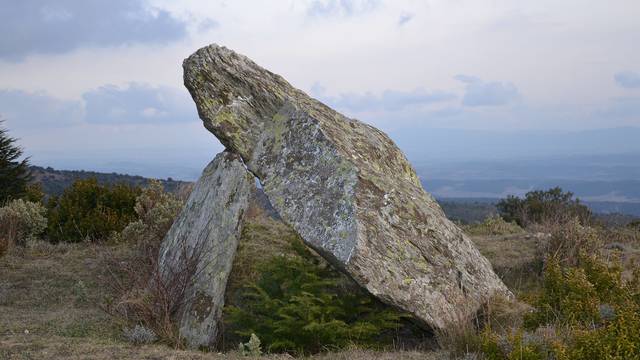 Explore the diversity of the Orbiel along numerous paths. The hills and valleys of this pristine landscape rub shoulders with an industrial past, history and rural heritage. The village of Ilhes-Cabardès preserves the memory of its oil mill and the Oliviers Valley; in the ancient pastoral village of Fournes-Cabardès, dolmens, menhirs and carved stone cupules remind us of our ancestors; in Roquefère, everything is made of local schist, including the castle, wash house and houses. 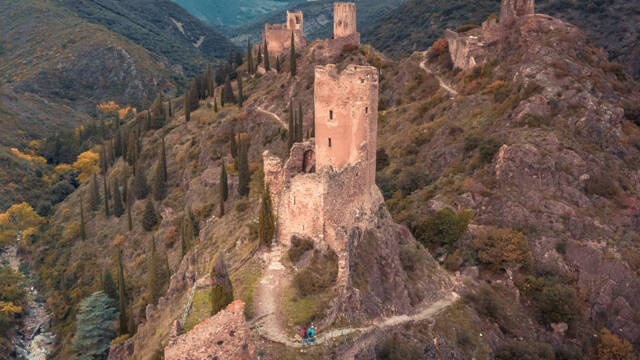 90 meters of waterfall give the dizziness in the heart of a preserved nature... the hike of Roquefère reserves unsuspected surprises. In the Orbiel valley, the view on the castles of Lastours leaves you speechless ... a tree house high up in the trees completes the decor for a weekend in the Montagne Noire with guaranteed vertigo! (Find out more).

The Barrencs plateau is named after the many 'barrencs', or deep mines ('gouffres' in Occitan) that lie under its surface. There are many seams of copper, iron, lead and silver. There was a well-organised mining industry here in the 1st and 2nd centuries BC, perhaps even from the 3rd and 4th centuries BC. Explorations of this site have revealed the scale of these subterranean galleries, some of which are 100m deep. They are often no larger than 1m across, and have an oval shape due to digging techniques used. Archaeological excavations have revealed a uniquely well-preserved heritage, which allows us to understand the techniques used and to recreate the working conditions of these brave miners. 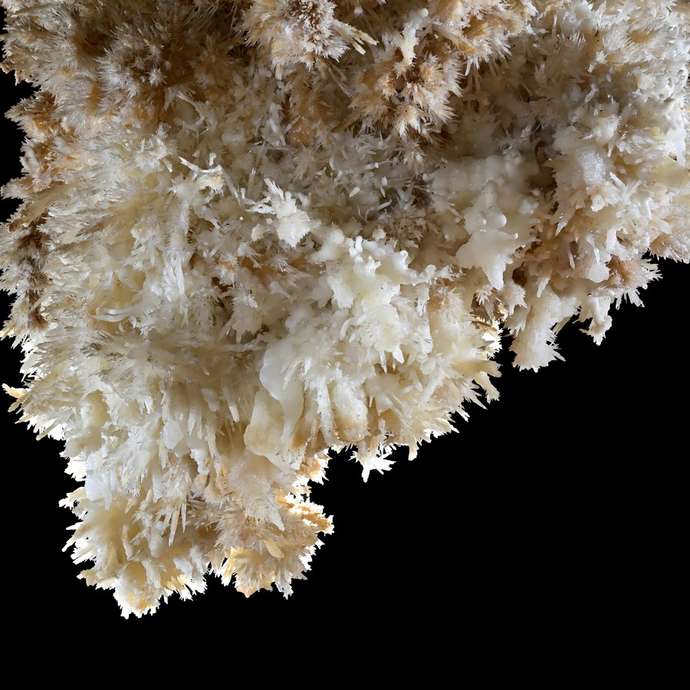 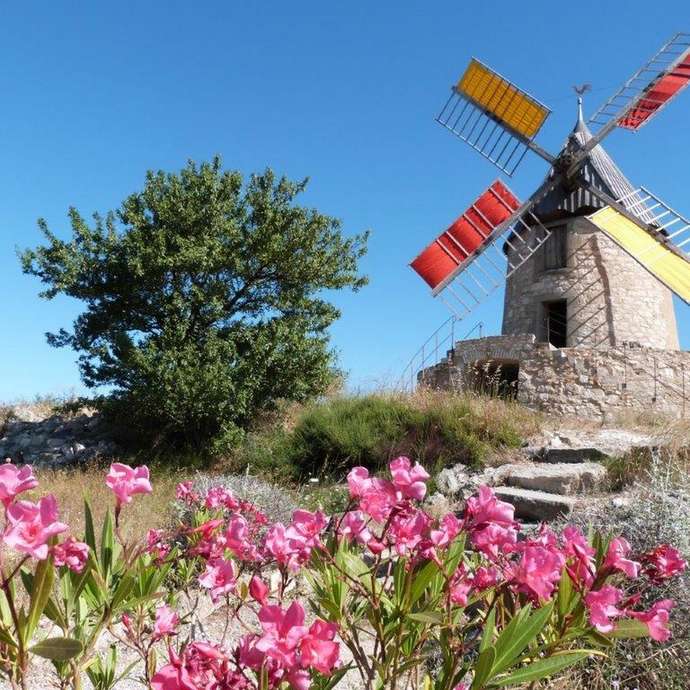 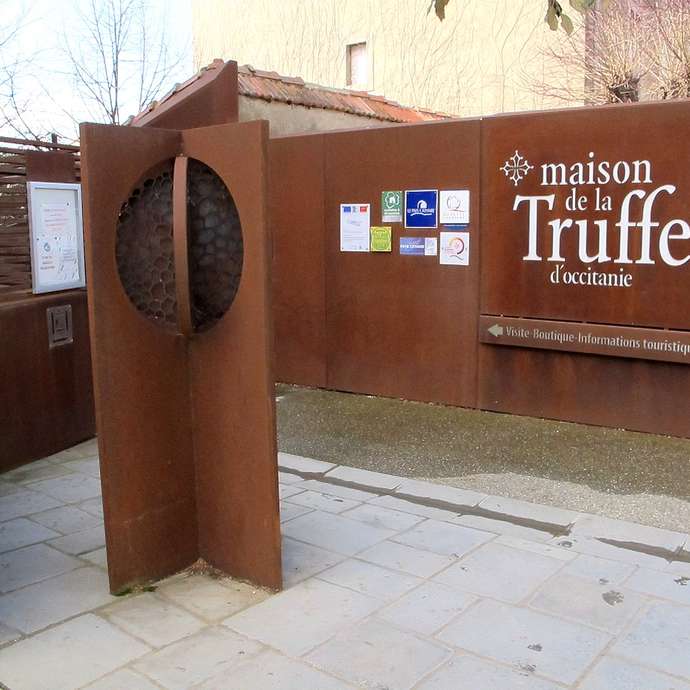 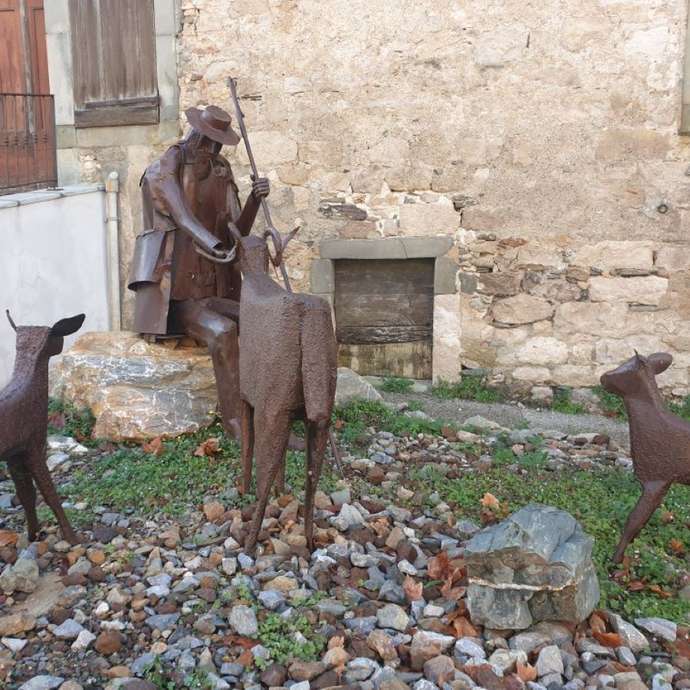