The treasure of the Montagne Noire

Saissac Castle is one of the oldest castles in the Montagne Noire. Perched at 450m above the edge of the plateau, barely connected to its village, it faces the Pyrenees above the plains of Carcassonne and Lauraguais. Its "treasure" refers to the first currency produced in the Midi by the Crown.

958. Gilabert, the royal agent of Saissac, bore witness to a donation given to Montolieu Abbey. Saissac, referenced for the first time, was thus a strategic point for the Carcassonne area. In the 11th century, the Trencavel family became viscounts of Carcassonne and overlords of Saissac. It was a hostile relationship, but at the end of the 12th century, Bertrand de Saissac was one of the most important vassals of the Trencavel family and the tutor of young Raimond Roger in 1193. Bertrand is a figurehead in Languedoc, protector of Cathar heretics. The castle was delivered to the French at the beginning of the Crusade, but the lords of Saissac fought until the bitter end. After the failure of 1240, their goods were scattered, and the bones of Pierre de Saissac were dug up and burned by the Inquisition. The original village on the slopes below the castle was abandoned in favour of its current location above the fortress. In the 16th century, Jean de Bernuy, the new lord of Saissac, transformed the medieval castle into a Renaissance home. Then came the Revolution, ruin and pillaging.

Buried in a field near to the current village lay a ceramic vase containing 2000 pieces of money: denarii and obols (copper and silver). This treasure discovered in 1979 is one of the largest collections of early royal money unearthed in Languedoc. Are these the savings of a Cathar believer pursued by the Inquisition? ... 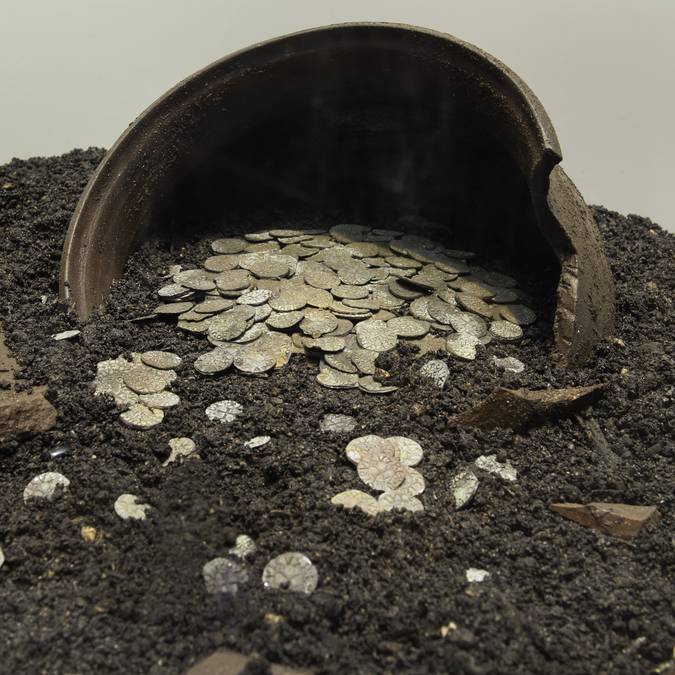 At the end of the village roads leading towards the Pyrenees, a ditch is still visible. A drawbridge isolates the castle on its overhang. The first terrace, a sort of "cour d'honneur" (three-sided ceremonial court), represents the oldest part of the site. The 13th-century tower, which is around 20m high, hides the base of the original keep, which dates from the 10th or 11th centuries. 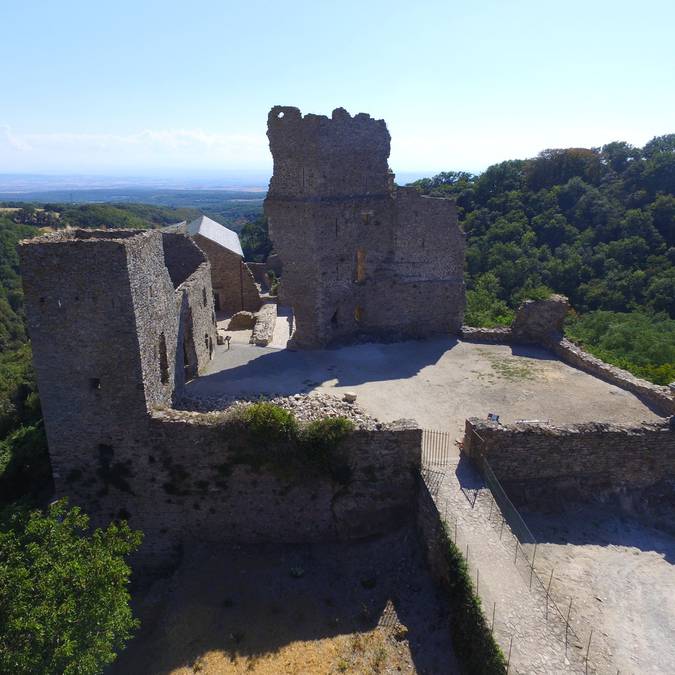 Aldonce was the daughter of Jean de Bernuy. Her husband, Guy de Castelnau, organised the construction of these rooms. Built at the end of the 16th century, this building has 3 floors, including an underground level. This fully-restored building contains an exhibition and historical story projected onto a big screen, exploring the treasure in all its mystery and majesty. 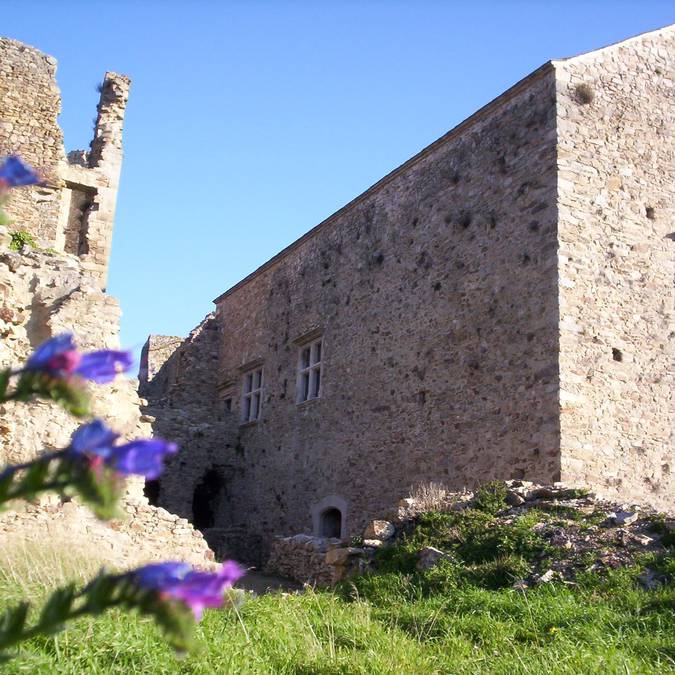 At the end of the castle, two circular towers lie at the end of the building's outer wall, the only ones on the site. Both have two floors, with a domed vaulted ceiling. In the 15th century, they were altered to store firearms. 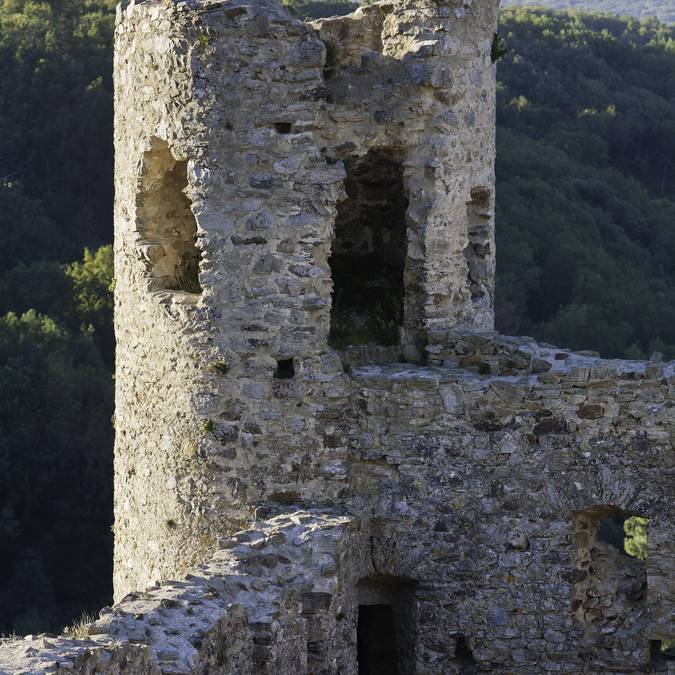 Although very overgrown, the ancient fortified village is still clearly visible. Ruined houses, a covered walkway with an arch saying "Porte de Toulouse" (Toulouse Gate) commemorate the displaced villagers after the Albigensian Crusade. On the waterways lower down, there are water mills that no longer turn. 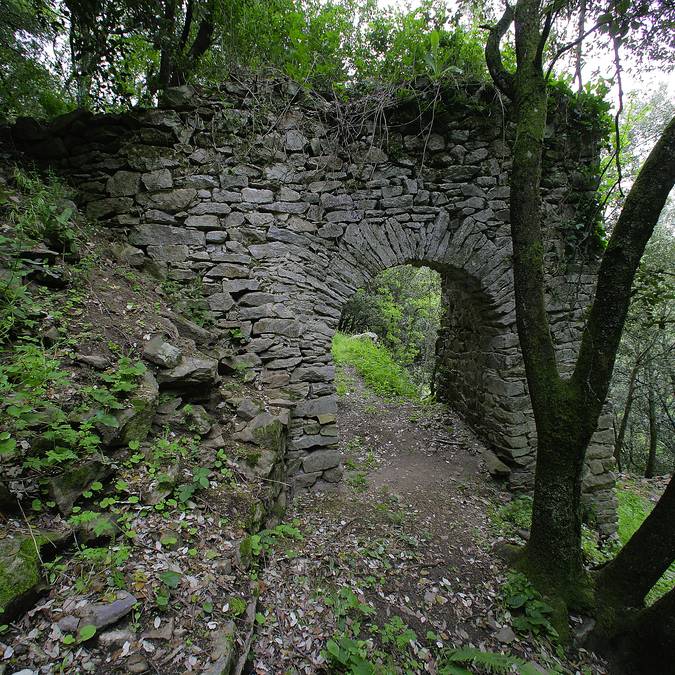 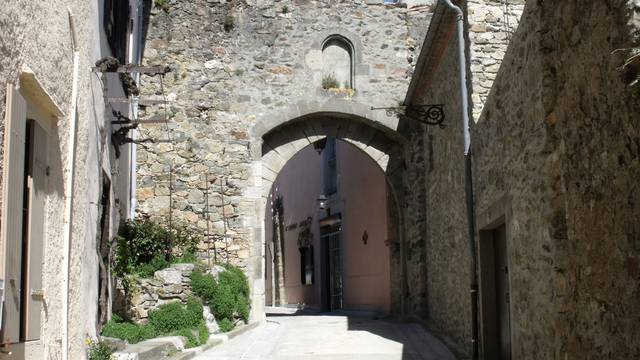 The village was built in the 14th century during the One Hundred Year War, after the Crusade, and is now a mixture of different architectural styles throughout the ages. The 'Porte d'Autan', and in the towers known as the 'Tour Grosse' and the 'Tour Carré', which make up part of the village outer wall, all date from the Middle Ages. The 17th century is represented by the Hôtel des Saptes, whilst the wash houses date from the 19th and 20th centuries. 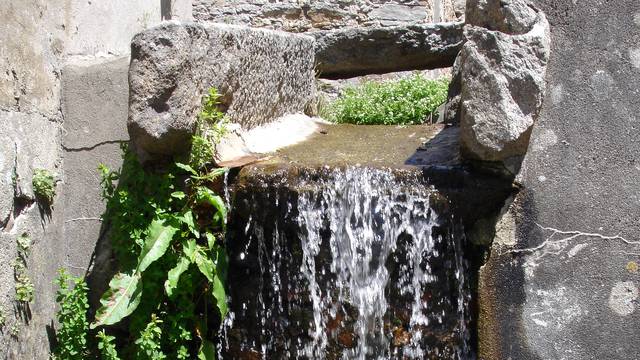 Water in the village

Saissac is a beautiful mountain village. Waters runs through the roads, which are punctuated with troughs and wash houses. A covered fountain, the oldest in the administrative district, livens up the Place aux Herbes. The 'Béal des treize meuniers' runs through the village, watering the gardens with the water of Vernassonne and Aiguebelle. 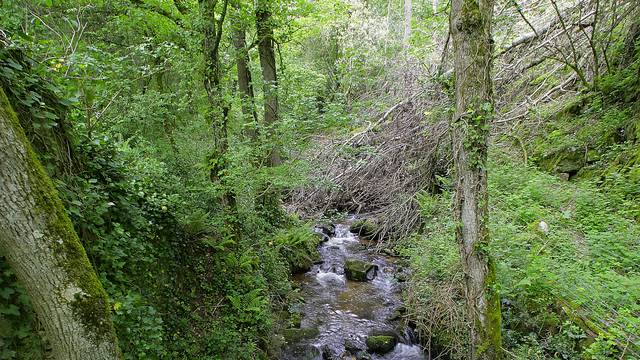 Saissac is bordered by magnificent forests of oak, beech and conifer trees. Located next to the village, the arboretum is popular with families, with its streams, waterfalls and botanical trail, as well as waterways, sports facilities and play areas. 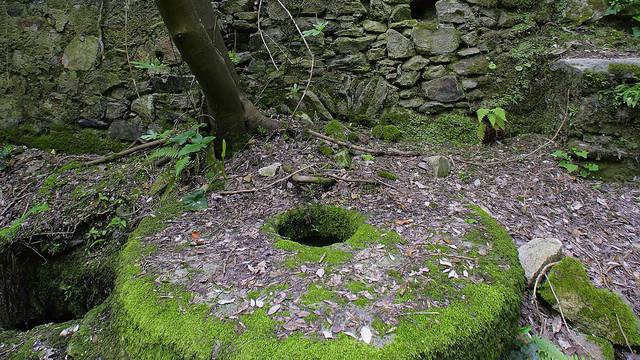 The Dure is one of the biggest rivers in the Montagne Noire. Today, it is a popular habitat for birds of prey, including the Eurasian eagle-owl, the booted eagle and even the short-toed snake eagle. However, during the 18th and 19th centuries, the Montagne Noire was a heavy industrial milling area. Horizontal and vertical wheels, powered by the strong currents of the Dure, turned the millstones of the flour mills, the pumps and poles of the fulling mills, and the trip hammers and bellows of the forges. In 1845, there were 610 mills in the Aude, of which 67 were along the river Dure. 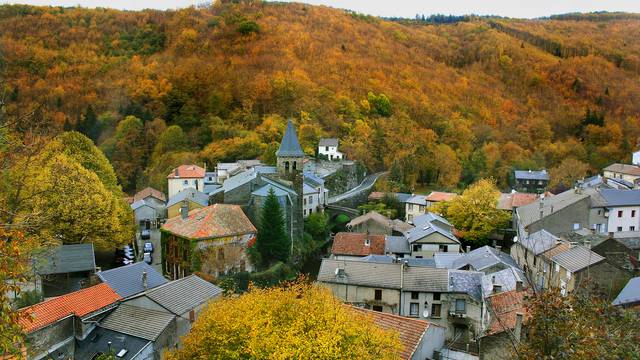 The Dure runs through this beautiful village, made of grey and brown schist stone, with flagstone roofs, tucked away in a chestnut forest. A survey has highlighted around 20 springs used by the residents for their beneficial effects. The Félide spring, for example, is always accessible, and is known for its diuretic properties and its benefits for people with liver problems. As you walk through the village and on the hiking trails, you will find other springs, and learn about their history and sometimes magical character... 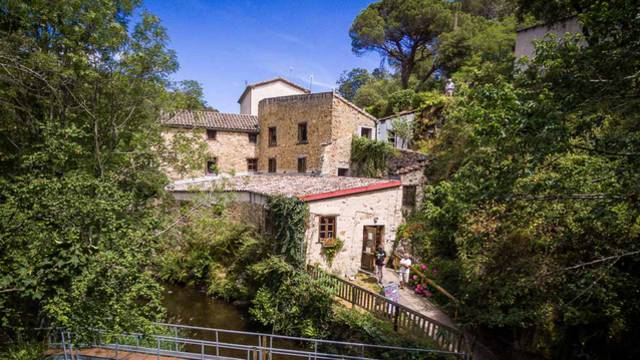 In the 17th and 18th centuries, Brousse had a large paper industry, which its lord, Pierre-Louis Reich de Pennautier (1614-1711), wanted to develop by inviting the renowned master paper makers from Aubagne. The current mill, built in 1845, is the last functioning mill on the Dure. Its owner, André Durand-Chaïla, continues and innovates this old tradition. The paper is made by hand from cloth, as well as plant fibres, such as nettle, fern and grape stalks, or even more unusual material, such as elephant dung! It's an exciting and lively visit for the whole family. This place is also popular with artists, such as Catherine Capeau, paper dress-maker, or the Japanese calligrapher Ayuko Miyakawa, for whom the mill creates unusual paper. 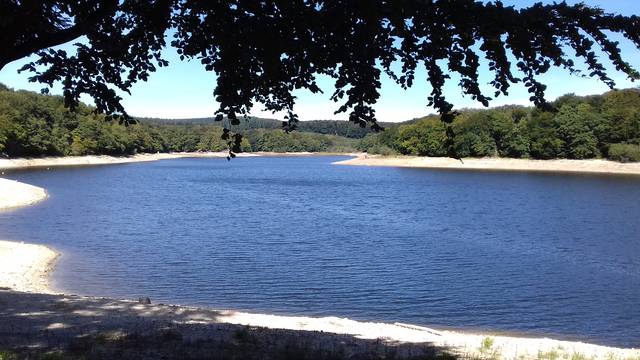 The Lake of Lampy

In 1782, the Lampy dam was completed, which was designed to increase the supply of water from the Canal du Midi to link the Canal de la Robine to Narbonne. This dam gave rise to the Lampy lake - a bathing spot and hiking area in the heart of the Montagne Noire, at 640m altitude. Large beech trees, oaks and spruces provide shade along a lakeside path. The small, monitored beach, with kayaks and paddle-boats doing laps of the lake is a peaceful spot, even in the high summer, and a majestic natural site, where the waves, caused by the breeze or a rower, lap against the shore.

In 1209, Saissac castle was returned to a French knight, Bouchard de Marly, who became an advantage for the Lord of Cabaret. Pierre-Roger de Cabaret bravely resisted Simon de Monfort in his seemingly impenetrable château. However, the pressure was great. Unexpectedly, he managed to capture Bouchard de Marly. It was a strong argument to negotiate, in 1211, a favourable surrender. 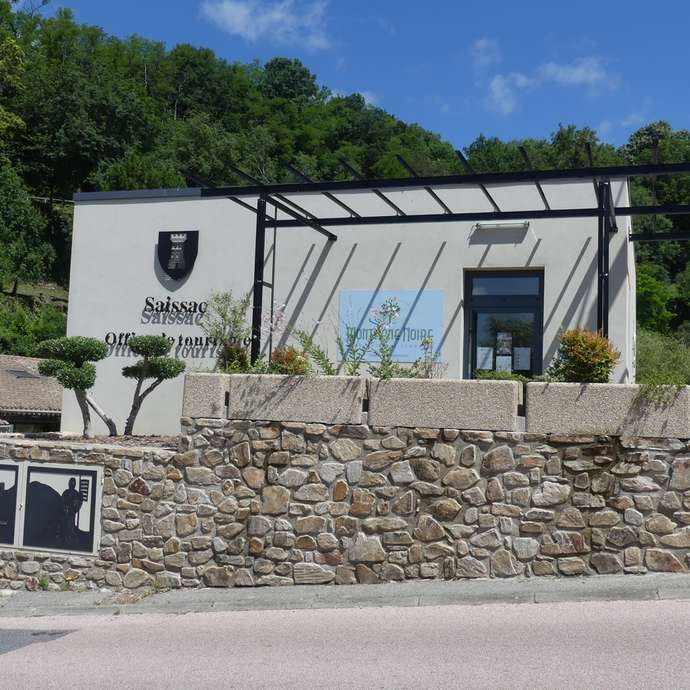 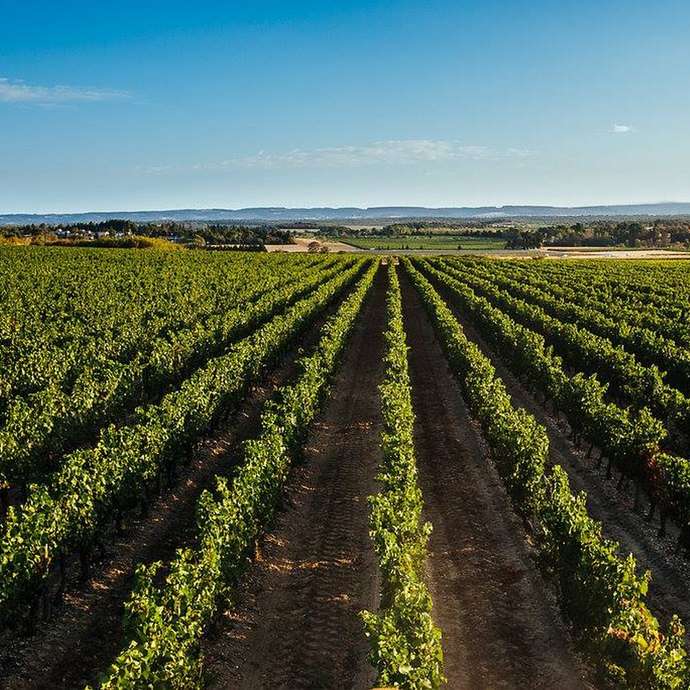 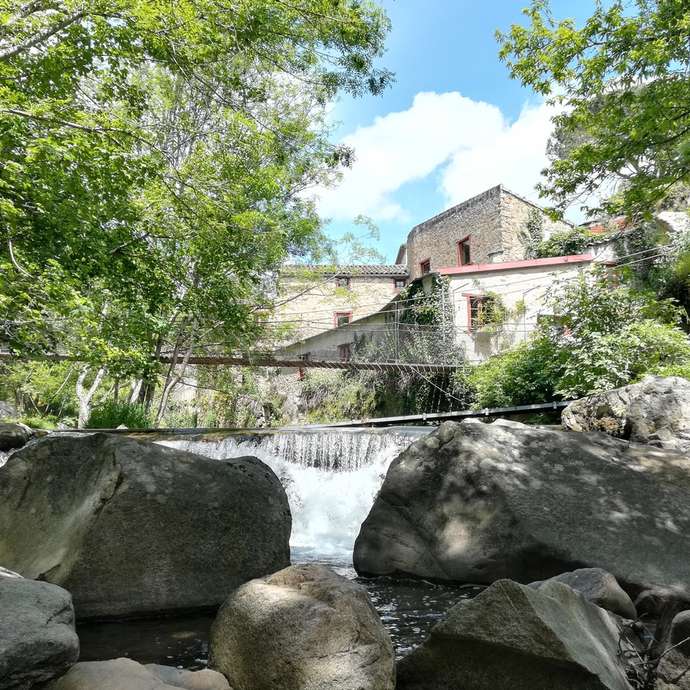 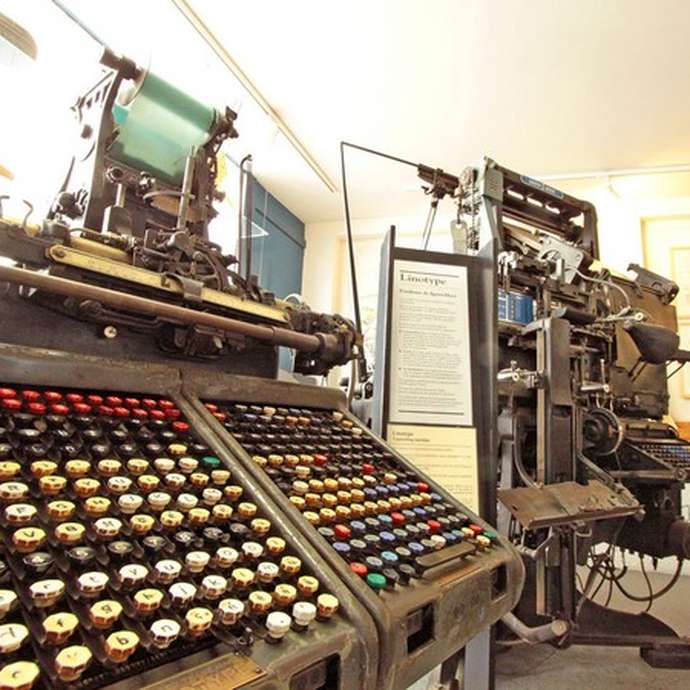