Discreetly located at the bottom of a leafy valley, on the banks of the river Vernassonne, Sainte-Marie de Villelongue initially looks like a typical example of a Cistercian abbey. However, once inside, far from the austerity of the Cistercians, fantasy reigns supreme.

1149. 12 monks and their superior left the Cistercian monastery of Bonnefort-en-Comminges to found a new abbey near Saissac: Sainte-Marie de Compagne. Around 1170, they moved this monastery to the hamlet of Villelongue, which provided more favourable conditions to its prosperity. In 1209, the Albigensian Crusade began. Sainte-Marie de Villelongue was an active participant in the fight against the Cathar heretics and was rewarded. Protected by the King and allied to Montfort, it grew and prospered, until there were 30 ordained monks. However, it fell into decline from the 14th century, due to the Black Death and damage by the Black Prince. The Abbey continued to be pursued by problems over the subsequent centuries, such as the Wars of Religion and serious financial difficulties in the 17th century. When the French Revolution arrived, there were only two or three monks living in the already ruined buildings, used for agriculture: what was left was spared pillaging. The remains were classed as a historic monument in 1916. The Abbey has belonged to the Eloffe family since 1965.

The Cistercian spirit dominates in these two areas. The monks' refectory is a beautiful room consisting of a plain single nave, where light penetrates through long bay windows and an oculus. The chapter house opens onto two large pillars which support the vaults. The capitals are decorated with plain curved leaves, which symbolise the Order. They feature "cistelles", small wild roses which grow on the edge of the river. Different types of flower are depicted on casement windows 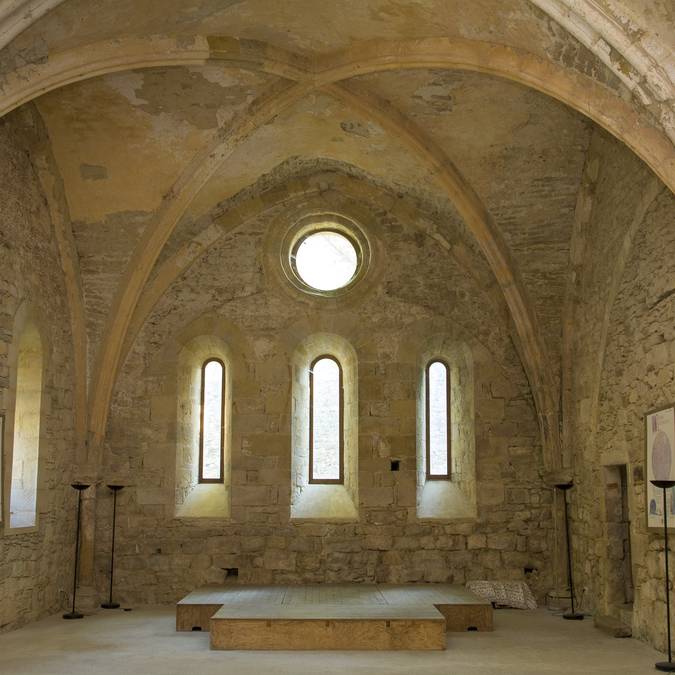 A single gallery with slender twin columns supporting 14 arches is all that remains of the cloister. However, it is still an outstanding gallery due to the quality of its capitals, including human heads, owls, cockerels and winged griffons. These are unusual decorations in a Cistercian abbey, rendered here with an impressive elegance. 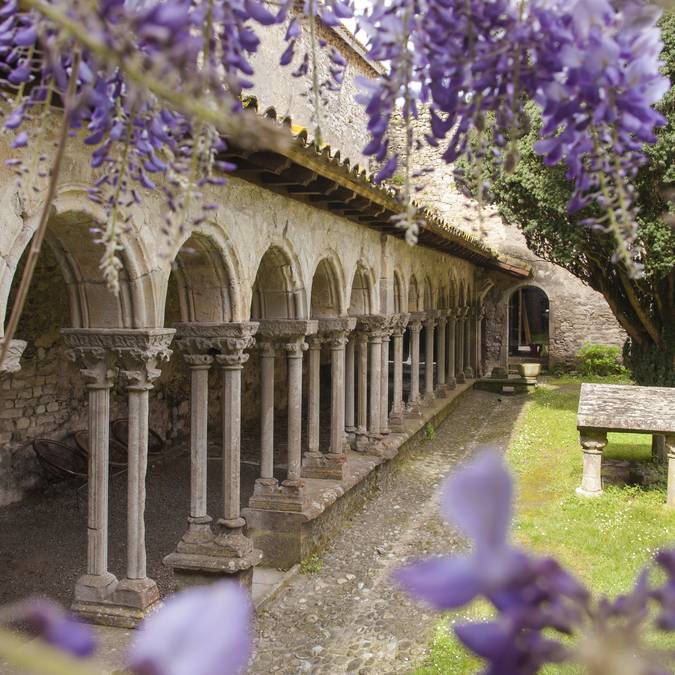 This is the most romantic place in the abbey. This aloof ruin, still has its "chevet" (eastern end of a church), which is characteristic of the Cistercian style. On the keystone of the choir stalls, an Easter lamb and a cross surrounded by a garland signify the presence of Christ. At the end of the church, to the right of the altar, is one of the best-preserved piscinas (the basin where the abbot would do his ablutions before Mass), alongside the newer piscina in Lagrasse. On the capitals and bases, enigmatic human heads surge from the greenery... there is still life here. 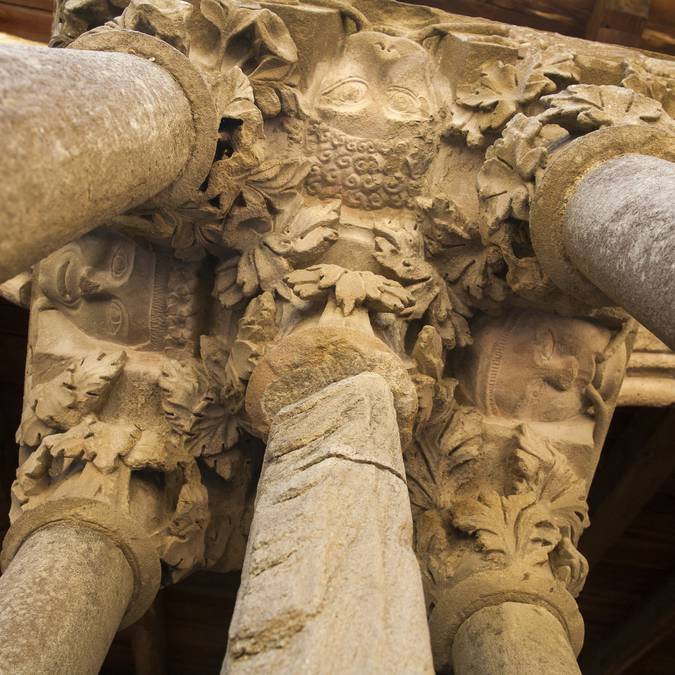 Villelongue is the only monastery in the Aude region to have an almost entirely-preserved outer wall, which dates from the 14th century. During the Middle Ages, the dovecote was a semi-circular tower, which used to be a gatehouse, (i.e. the entrance to the abbey). At the foot of the castle, the water from the reservoir has been provided by the fish-filled river Vernassonne since the Middle Ages. 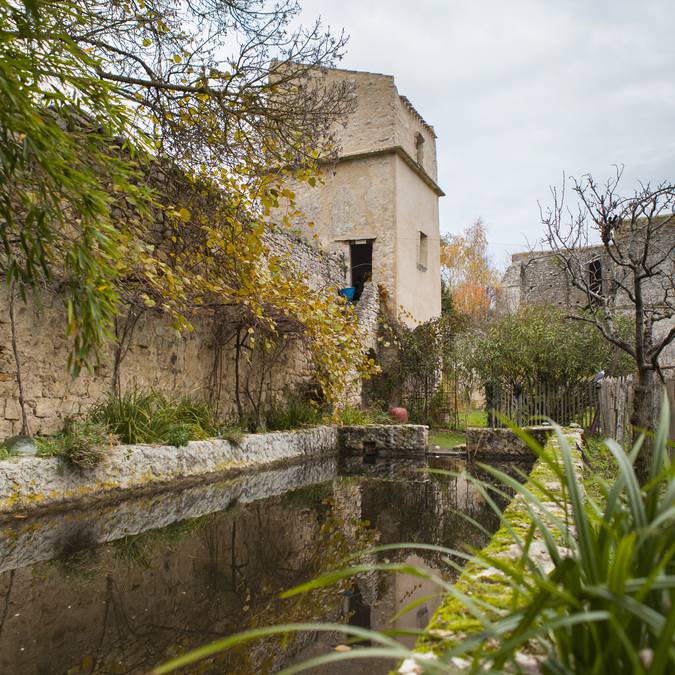 This extraordinary garden, protected by the outer wall of the abbey, is called "Jean le Bleu's garden", a name echoed by the blue wisteria in the cloister, with its flowers spread over the furniture and objects planted in the garden. Marrows, of all shapes and sizes, add their strange silhouettes to this intimate and imaginative space. 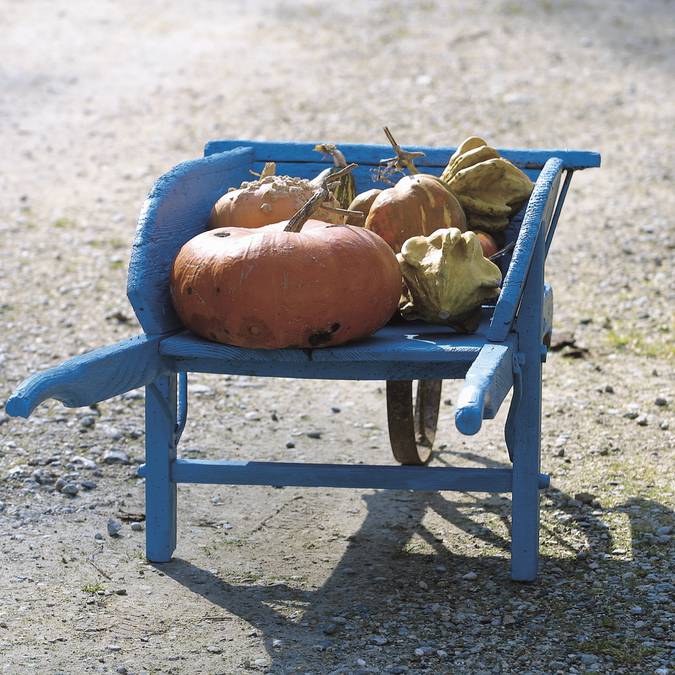 Saint-Martin-le-Vieil became part of the Villelongue Abbey estate during the Albigensian Crusade. This fortified village developed around a modest castle, of which two 14th-century towers remain. A network of charming narrow roads link the church, the château and the oratory, from which you can see the Pyrenees.

This Medieval garden at the top of the village was built in the 14th century next to the Saint Roch oratory, in order to protect the villagers from the Plague. It is in the shape of a rose window, a nod to the one that disappeared from Villelongue Abbey. During the day, you can walk through it, guided by stone paths between the Medieval plants. At night, the garden is illuminated like a stained-glass window. 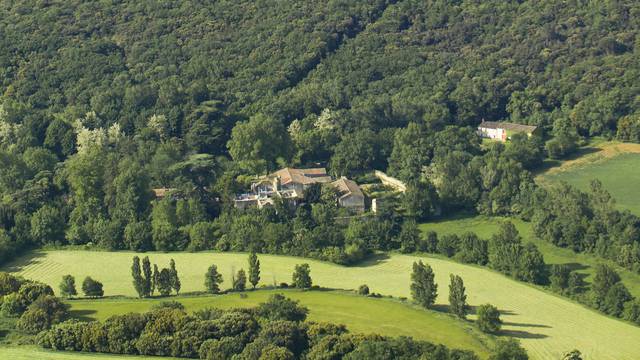 You can follow the ancient path that leads to Villelongue Abbey, through woods and vineyards. Or if you prefer, follow shaded paths and dry stone buildings along the Sentier des Capitelles. The Sentier des Rives de Lampy takes in magnificent panoramas, and follows the river to a little lake, where you can have a picnic, accompanied by birdsong. 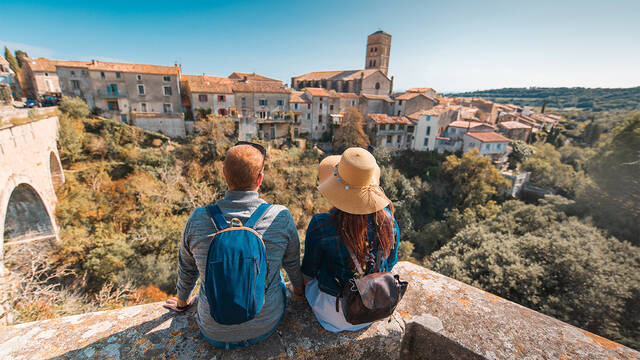 17 bookshops of old and modern books, bookmakers, a museum of graphic arts and printing, craftspeople and artists, an art centre... bookworms, art lovers and inquisitive minds will love Montolieu! Wander round, stumble across a rare find, learn more about printers, or even try printing yourself! This village found its niche under the leadership of Michel Braibant, a bookbinder who, in creating this concept around books, also revived the paper mill in nearby Brousse. It's an exciting visit where you can learn to make paper from fabric or vegetable fibres... both children and adults can step up to the plate! (find out more about this experience). 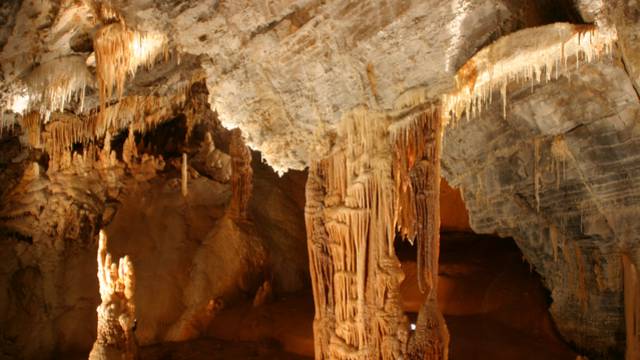 This mountain finishes the Massif Central in the south, and extends to the Carcassonne plain. Its highest point is the Pic du Nore in the Aude region. At 1211m altitude, it reigns over a seemingly endless countryside. and is synonymous with nature and diversity, Forests, lakes and streams are plentiful in the northern region. In November, the forest around Saissac is a real sight to behold, with ochre and red beech trees. Around Lastours, the landscape is much more Mediterranean. Under the heath and oak trees in Cabardès, is hidden an underground network of caves and rivers, of which the caves in Limousis and Cabrespine are among the most spectacular.

In 1970-1, the Eloffe family began the first conservation works to protect the cloister. To insure regular construction sites, the Amis de l'Abbaye de Villelongue was founded in 1984. Thanks to its numerous supporters, the refectory has been restored to its 13th-century appearance, the vaults of the two chapels have been consolidated, the chapter house, the dormitory and the ground floor of the lay brothers' building and the murals in the sacristy have also been restored. The association also organises popular cultural activities. Since 2003, the State, the Region and the Department have undertaken extensive projects to restore the abbey.